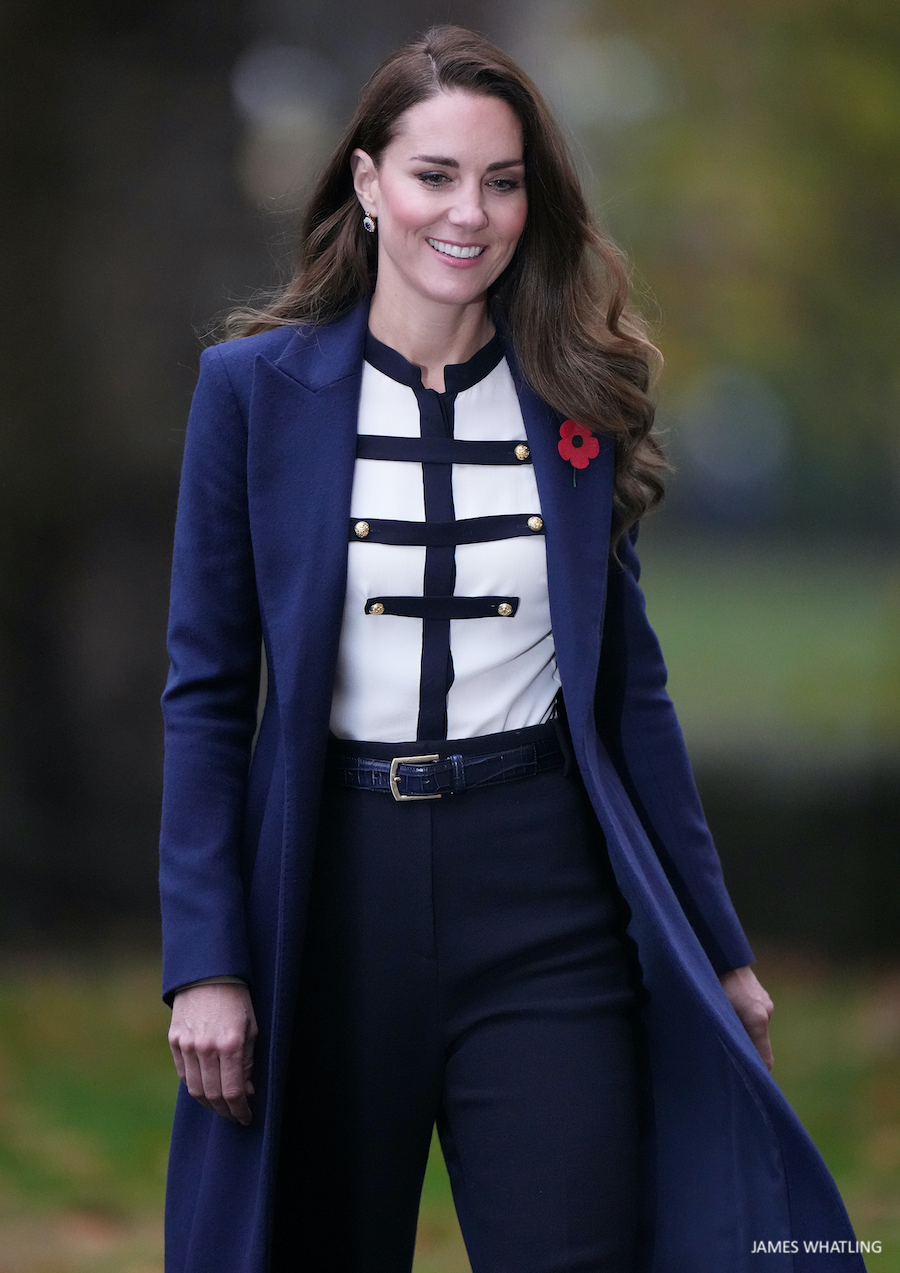 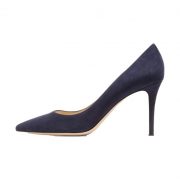 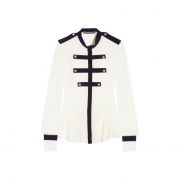 Here’s how the IWM describes the two new exhibitions:

These new galleries will change the way we understand the past for generations to come.  Spanning two floors, these vast new galleries bring together the stories of real people from diverse communities to examine the complex relationship between the Holocaust and the course and consequences of the Second World War.

The new galleries bring unseen objects, untold stories and unheard voices together to help understand the genocide of the Holocaust and the most devastating conflict in modern global history.

The Duchess browsed key exhibits during her visit, and explored displays relating to the experiences of survivors who still keep the memory of the Holocaust alive today.

While touring the two galleries, Kate browsed the Generations: Portraits of the Holocaust exhibit which contains two photographs she snapped last year.

The Duchess captured portraits of Holocaust survivors Steven Frank and Yvonne Bernstein and their granddaughters.

The photographs were taken as part of a larger project by the Royal Photographic Society to mark Holocaust Remembrance Day and the 75th anniversary of the liberation of Auschwitz.

Kate reunited with both Mr Frank and Ms Bernstein in the gallery, greeting both with a hug.

The exhibit also featured photographs of Holocaust survivors, Zigi and Manfred, who The Duchess first met in Stutthof in 2017 and spoke to again to mark Holocaust Memorial Day in January of this year.

The exhibition also details the stories of the Windermere Children, child Holocaust survivors who went to stay in the Lake District in 1945 for a period of recuperation following the atrocities they experienced in concentration camps and the ghettos of Nazi-occupied Europe. You may recall Kate travelled up to the Lake District in September to take a boat ride with Ike and Arek, two of the 300 Windermere Children.

The five Imperial War Museums explore conflict and tell the stories of those whose lives have been shaped by war, from the First World War to the present day.

It is so difficult to segue from serious topics to those more frivolous, like fashion. However, I appreciate that this is, after all, a style blog and many of my readers are here to learn about Kate’s sartorial choices, which I do enjoy writing about. So here we go:

Kate ‘shopped her own wardrobe‘ as they say, refashioning pieces we’ve seen her wear to public engagements before. Including, this navy blue long-length coat by British label Catherine Walker.

The Duchess first wore it earlier this year, to visit the city of Wolverhampton.

Sadly, I have no further information about the coat as it’s a custom piece. (PEOPLE Magazine’s Monique Jesson first reported it was a Catherine Walker piece, so I’m pretty certain about the ID. I just don’t have any more details about the item.)

Catherine Walker founded the eponymous couture house in 1977 with her husband Said Cyrus. Walker passed away 11 years ago but Cyrus still runs the business to this day.  Princess Diana famously wore Walker’s designs. Kate has worn several dresses and coats from the label during her time in the Royal Family.

Kate’s blouse is by Alexander McQueen. The Duchess has owned the military-style blouse for over a decade and has now worn it to four different public engagements since joining the Royal Family.

Above: Kate wearing the blouse during a visit to Birmingham following riots in the city (2011), retracing her Grandmother’s footsteps at Bletchley Park (2014) and visiting the 1851 Trust in Portsmouth (2016).

Back in 2011, Net-A-Porter.com sold the blouse and described it as “exuding sophistication”.

Now let’s take a look at Kate’s new navy blue shoes. Middleton Maven thinks they’re the Gianvito Rossi 85 pumps in navy and I have no reason to disagree! The Duchess is a fan of Rossi’s shoes and owns multiple pairs of the designer’s signature 85 and 105 styles, so this is likely.

A look at Kate from the side, so you can compare the shape/heel:

The midnight blue suede pumps have been crafted in Italy.  They feature an 85mm heel and elegant pointed toe.  The shoes are still available to buy at Net-A-Porter.com for £510 / $695 and come in a host of other colours too.

Kate’s earrings are Sapphire and Diamond drops. Many believe they were given to Kate by William to match her engagement ring, and they were perhaps remodelled from a pair that belonged to the Duke’s late mother. However, this has never been confirmed.

The Duchess has worn the earrings frequently throughout the last decade. (The Data Duchess on Twitter counts over 60 wears to public engagements.)

Kate’s trousers are new (to us, at least! She might have owned them for some time.) They’re navy blue, slim-fitting with a neat seam at the front. Sadly, I don’t know anything about them.

And finally, the Duchess finished her ensemble with a blue belt. This is another piece that I have no further information about, I’m afraid. 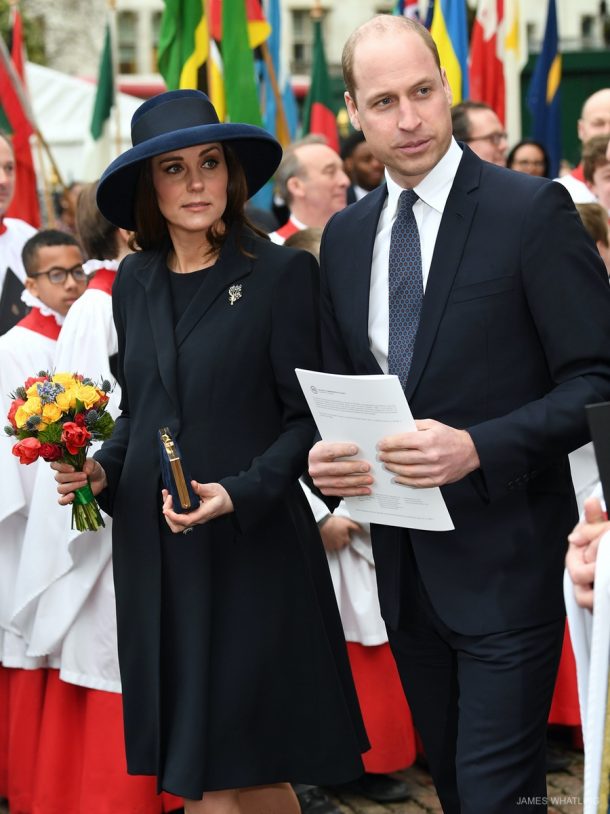 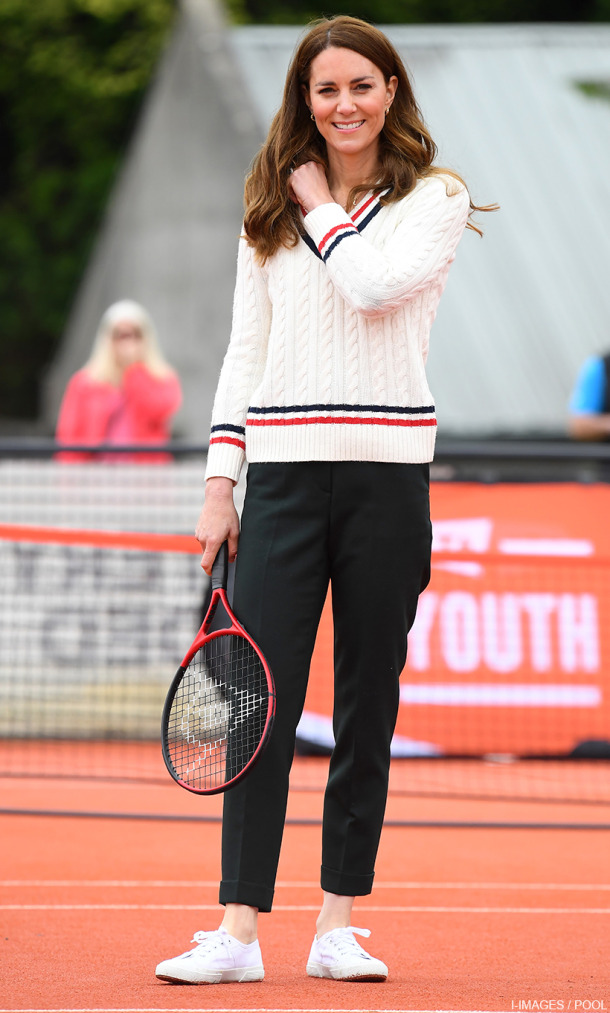