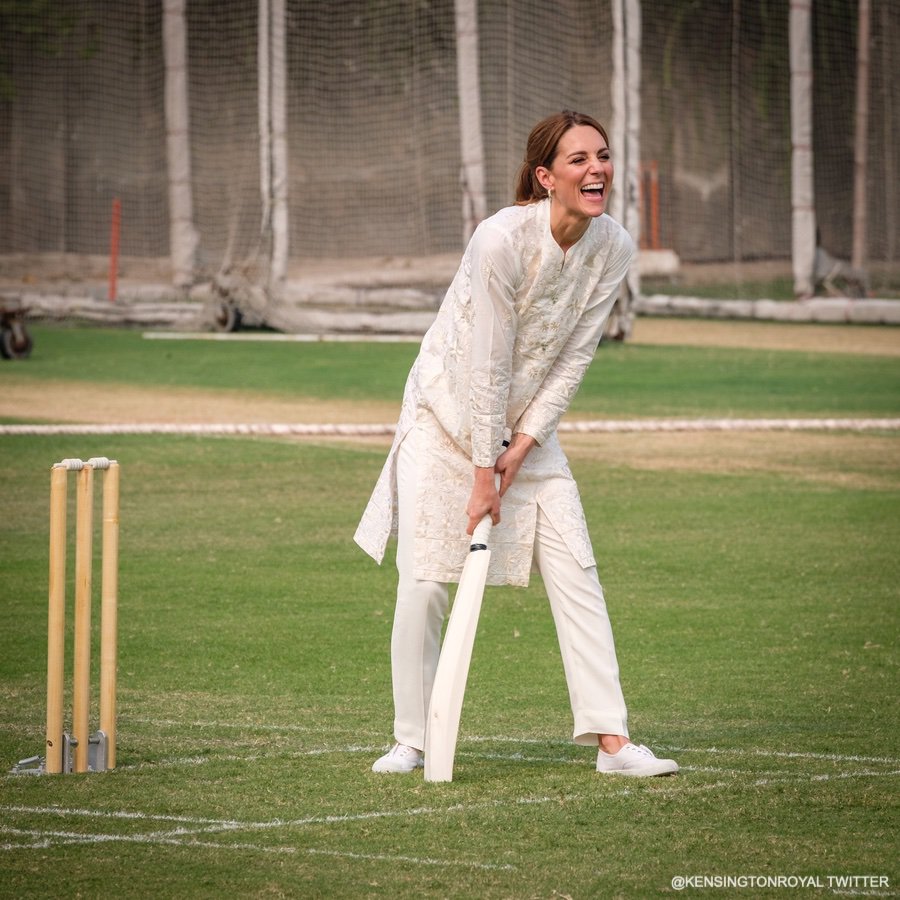 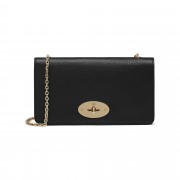 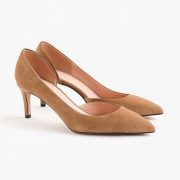 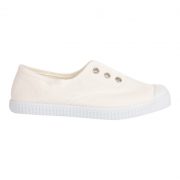 William and Kate travelled from Islamabad to Lahore for the fourth day of their official visit to Pakistan. It’s the couple’s penultimate day in the country as they will return home tomorrow (Friday 18th).

They’re visiting Pakistan at the request of the Foreign and Commonwealth Office.  You can read all of my coverage so far on this page.

Lahore is the second-most populous city in Pakistan and capital of the Punjab province.  It is known as the City of Gardens due to its numerous parks and green spaces.  It’s famous for its rich culture and lively atmosphere.

The couple landed at Lahore airport, where staff had rolled out a red carpet.  They were greeted by Mohammad Sarwar, the current Governor of Punjab and Usman Buzdar, the Chief Minister of Punjab.

The four conducted a meeting.

The Governor and Chief Minister presented the Duke and Duchess with a traditional ‘handicraft’ carpet.

On Twitter, the press officer for the Governor of Punjab described the gift as a “token of love” and an “amazing handmade piece of art”.

The second engagement of the day took place at the SOS Children’s Village, a private social welfare organisation that provides over 150 orphans and abandoned children with a loving home and family.

The organisation promotes the development of children into happy, confident and resilient adults.  Of course, this ties in with Kate’s interests.  The Duchess regularly undertakes engagements back home promoting the same topics.

During their time in the orphanage, William and Kate read a story to the children and attended a children’s birthday party.  Kate also gave a speech, even attempting a few words in Urdu.  More from the Telegraph:

The Duchess of Cambridge has spoken of the “vital role of mothers”, as she says family is not just about blood but the “quality of those relationships that matters”.

The Duchess, who delivered part of her speech in Urdu, emphasised the key role of the extended family during a visit to a children’s birthday party in Lahore.

In her first speech of the royal visit to Pakistan, she told an audience: “Parents, children, aunts, uncles, grandparents all play important roles – you have reminded us exactly what family means.”

Watch Kate deliver the speech below:

Next, the royal pair travelled over to the National Cricket Academy.  Cricket is the most popular sport in Pakistan.

The couple spoke with young children who take part in the British Council’s DOSTI cricket programme, met with famous international cricket stars and had a go at the sport for themselves.

According to journalists at the scene, William did well but sadly, Kate was caught out twice.

The Duke and Duchess visited the famous Badshahi mosque and Shaukat Khan Cancer Hospital later in the day. As Kate changed outfits for those engagements, I have covered them in a second article.

The Duchess opted for another traditional outfit for the first half of the day in Lahore. She wore a shalwar kameez by Gul Ahmed, a Pakistani textile company headquartered in Karachi.

The company operate a chain of shops and employ over 7,000 people across Pakistan.

If you look closely at the fabric, you’ll notice flowers embroidered onto the cream background. One is a jasmine flower, the national flower of Pakistan (kudos to Katie for spotting this!)

Over on Twitter, Sarah told me she contacted Gul Ahmed about Kate’s outfit.  The company confirmed that the ensemble was specially designed and exclusively made for Kate.  They did, however, send Sarah a link to a similar two-piece outfit from their current collection:

The company describe the shalwar kameez as follows:

The outfit retails for PKR 11,290 on their website (around £56 GBP / $72 USD at the time of writing) though, only limited sizes remain in stock.

Kate wore a dupatta/shawl by Maheen Khan. It’s the third time during the tour (so far) that Kate’s worn an item from the Pakistan designer. I show a similar design from Maheen below:

As I wrote in an earlier post, Maheen Khan is a very accomplished designer.  She has worked on costumes for film and TV, plus she used to do embroidery work for Catherine Walker (one of Kate’s go-to designers) before she died. Pictured below, Kate in Maheen Khan on the second day of the tour:

Onto Kate’s accessories now. The Duchess carried her Mulberry Bayswater clutch in buttercream suede (shown below in leather).

She owns the clutch bag in three different colours. She first debuted the butterscotch colour during a visit to Mumbai, India in 2016.

Sadly, Mulberry no longer make the Bayswater clutch.  The company stopped manufacturing it a couple of years ago.  The Amberley (L) and Darley (R) designs are probably the closest styles they sell today.

By carrying a Mulberry clutch bag, Kate is flying the flag for British fashion in Lahore.   The quintessentially British company has roots in Somerset, England.  Founder Roger Saul started the company at his kitchen table in 1971.  His sister designed the now instantly recognisable tree logo.

Kate swapped between two pairs of shoes during the day, both new (to us style watchers anyway.) I believe the first pair is from J.Crew.

(Note: there’s some confusion over the shoe ID. The style above is called both Lucile and Colette on different sites. )

The brown pumps feature a D’Orsay style cutout, an elegant pointed toe and a slim heel.  J.Crew manufacture the pumps from high-quality leather suede in one of Italy’s classic shoe factories.

Kate changed into a flat pair of white plimsolls at the cricket stadium.

Kate fans on Twitter and Instagram instantly recognised the shoes as Prince George and Princess Charlotte both wear them in blue! (Shown below on Prince George at a polo match in 2018). They’re the ‘Plum’ style by Hampton Canvas.

The shoes come in both adult and child sizes, plus twelve different colours and prints. The company design in London and manufacture their shoes in Europe.

The elasticated laceless design allows the shoe to slip on and off with ease.  The cotton shoes feature three eyelets on the front and a hand-finished natural rubber sole.  They’re stocked at Trotters for £38 (around $48 USD).

Asprey London is another British company.  Founded in 1781, Asprey is now regarded as a luxury lifestyle brand and recognised across the world.  The company holds a Royal Warrant from the Prince of Wales for its jewellery and silver goods.

I loved the embroidery on Kate’s shalwar kameez and her slip-on plimsols looked very comfortable!

Did you like Kate’s traditional outfit? Let me know your thoughts in the comments below. 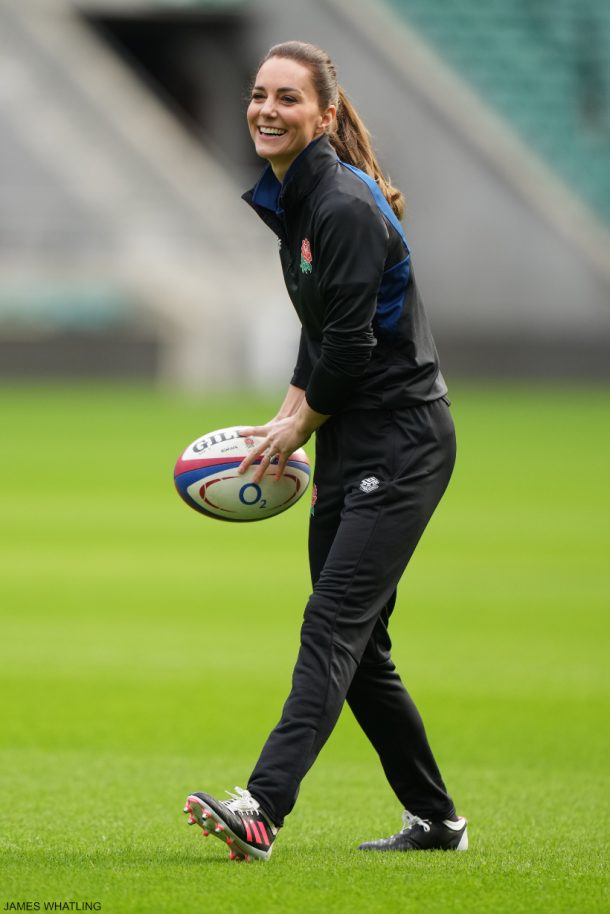 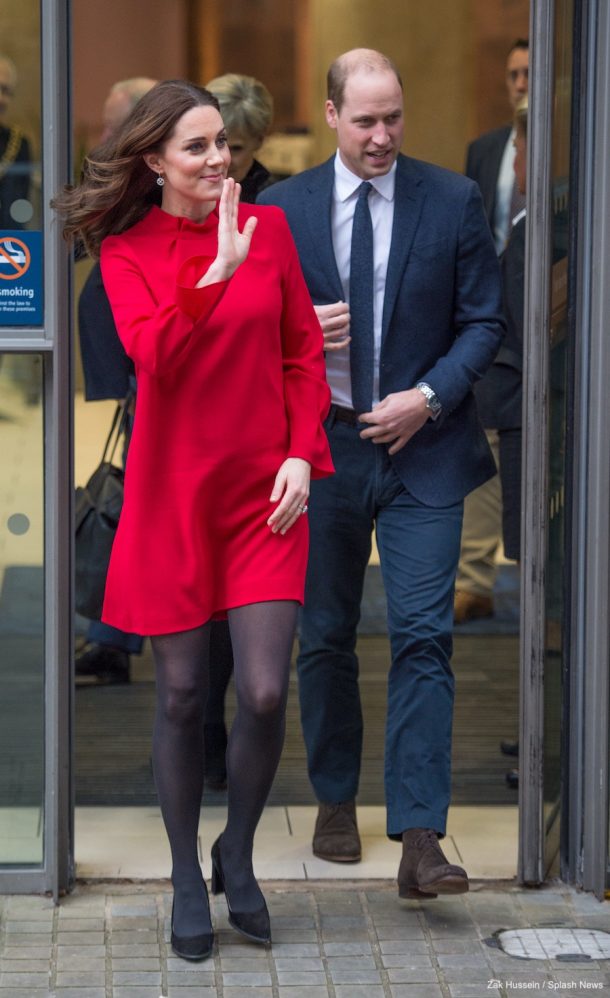