Next month, the Duke and Duchess of Cambridge will take Prince George along on their eagerly awaited tour of Australia and New Zealand. This evening (London time), details have been announced: 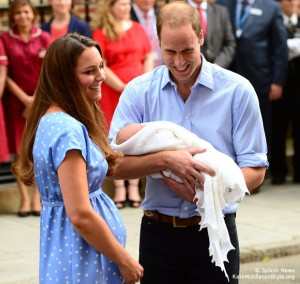 The royals will leave London on Monday 7th April, before landing in Wellington, New Zealand’s capital city.  After a short welcome on Monday, the royals will take a rest day.  On Wednesday April 9th, official engagements begin!

While in New Zealand, William and Kate will undertake a number of engagements each day, including paying tribute to earthquake victims in Christchurch, racing each other in yachts across Auckland Harbour and attending a wreath laying ceremony to remember the fallen from World World I.

William, Catherine and George will spend nine full days in New Zealand in total, before moving on to Australia on Wednesday 16th April.

During the second leg of the tour, the Cambridges will spend a further nine full days travelling across five different Australian states and territories.

The  Australian leg of the tour will include visits to war memorials to mark the centenary of the outbreak of World War I, a swanky reception at the Sydney Opera House, a visit to the Blue Mountains to meet families affected by the October fires and a commemorative service at the Australian War Memorial.

It is thought that Prince George will attend one event per country with his parents.   Miguel Head (Prince William’s Private Secretary) has conformed “the couple have to make a final decision about that much closer to the time.”

This is Kate’s first time to both Australia and New Zealand (unless you count the short airport transit during the jubilee tour in 2012).  William has toured both countries previously.

Note worthy:  Apparently, the Queen had to give special permission for the two heirs, Princes William and George, to travel on the same flights!

New Zealand (reproduced from The Mirror.)