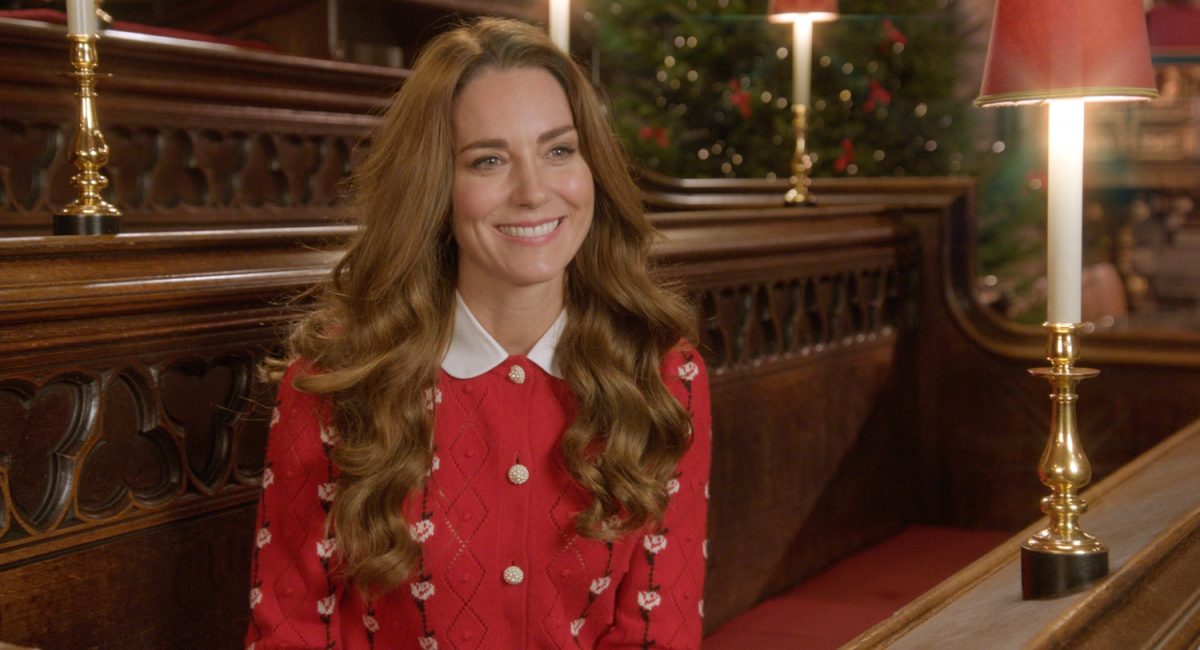 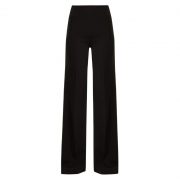 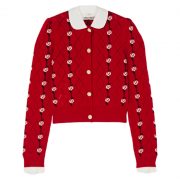 She went to assist with preparations ahead of the Christmas carol service she hosted on the following day, titled Royal Carols: Together At Christmas. The concert was recorded and will be broadcast as a one-off special on ITV at 7.30 pm on Christmas Eve.

Kate spearheaded the project with The Royal Foundation, the charity she co-leads with Prince William.  She wanted to reflect upon the challenges we’ve faced over the last 20+ months during the pandemic and celebrate those who’ve gone the extra mile for their communities.

Here’s a photo of William and Kate inside the Abbey during the service as it was recorded:

You can read my full post on the service and Kate’s red bow coat dress here.

All week, Kensington Palace and ITV have been releasing new trailers, photographs and snippets of video to tease the programme before it airs.  On the 22nd of December, they released three new photographs of the Duchess visiting Westminster Abbey the day before they filmed the concert. In the photos, she is helping abbey marshal Leticia Cachoeria Edwards with preparations. In the new images, Kate is helping to move wreaths and decorate Christmas trees.

The Queen sent the trees to Westminster Abbey.  They were donated from the Windsor Great Park estate. The wreaths were donated by the Royal Horticultural Society.

The Palace and ITV also released a video of Kate giving a message of thanks. You can watch below:

The message of thanks is taken from the television programme, it’s excerpted from Kate’s introduction to the concert. The full introduction starts with Kate saying she’s “so excited” to be hosting the carol service. She says that Westminster Abbey is “really special” to both her and William.  Of course, the two married at the abbey over a decade ago.

Earlier in the week (20th of December) ITV shared a short trailer to promote the concert.  It features a snippet from Kate’s introduction before cutting away to glimpses of the performances, readings and carol singing that took place.    You can watch it below:

Many of the guests who attended the special carol concert were nominated by charities Kate is associated with or Patron of, including Action for Children, Anna Freud National Centre for Children and Families, East Anglia Children’s Hospice (EACH), Family Action, Forward Trust, Little Village and Place2Be. (Below, Kate opening the EACH Treehouse Hospice in 2012.)

I suspect we’ll see further film footage of the Duchess in her red cardigan during the broadcast on Friday. Perhaps previous unseen snippets of her from past royal engagements too.

Upon first inspection, one may assume the Duchess is wearing a red Christmas jumper. The first time I looked at the photo, I thought it featured a repeating snowman design complete with carrot noses (turns out, they were roses!)    The festive piece is actually a cardigan by Miu Miu:

Thank you to Sophia for the ID.

The red cardigan features a jacquard-woven design, complete with a white and black rose pattern and mother-of-pearl buttons. The frilly cuffs add a feminine touch. The cardigan is finished with a removable white cotton collar.

Kate’s got at least two other Miu Miu items in her collection. A festive tartan coat that she wore on Christmas Day in 2017 and a red suede bag with a bow detail on the front. She first debuted this during a visit to Vancouver, Canada in 2016 (both pictured below).

In the new photos, we can see Kate paired the red cardigan with a pair of black trousers.  Heaven on Twitter thinks they’re by Roland Mouret, the Axon wide-leg style.  She noticed the distinctive side-zip and slit pocket detailing, shown below:

The chic wide-legged trousers are crafted from a stretch fabric to ensure a comfortable and flattering fit. They feature a relaxed silhouette and pressed creases on both the front and back of the legs.

Sadly, the trousers are no longer available to buy. They originally sold for £595 at Matchesfashion.com ($960 USD).

The Duchess of Cambridge is no stranger to Roland Mouret’s designs.  Off the top of my head, I know she’s worn four dresses by the designer. Here’s a quick refresher:

French designer Roland Mouret is known for creating luxury womenswear.  He shot to fame after designing the now-iconic ‘Galaxy’ dress in 2005, a dress that Grazia describe as “a structured design that created a bombshell, hourglass silhouette on anyone who wore it”.

Having watched the video a couple of times, I’d say it looks like Kate wore her Kiki McDonough ‘Lauren’ earrings. (Though, don’t quote me on this!)

The leaf-shaped 14ct gold earrings are decorated with pavè diamonds. They retail for £2,300 on Kiki McDonough’s website and for $3,435 at Neiman Marcus.

Kate’s worn them dozens of times since adding them to her collection a few years ago.

The Duchess has embraced many designers since entering the Royal Family but her loyalty seems to lie with Kiki McDonough. Last time I counted, Kate owned over 20 pieces by the Kiki and had worn her designs to hundreds of public engagements—far more than any other jeweller!

Kiki McDonough is a British fine jewellery designer with a passion for beautiful gemstones.  She’s known for her striking colour combinations and timeless, wearable designs.