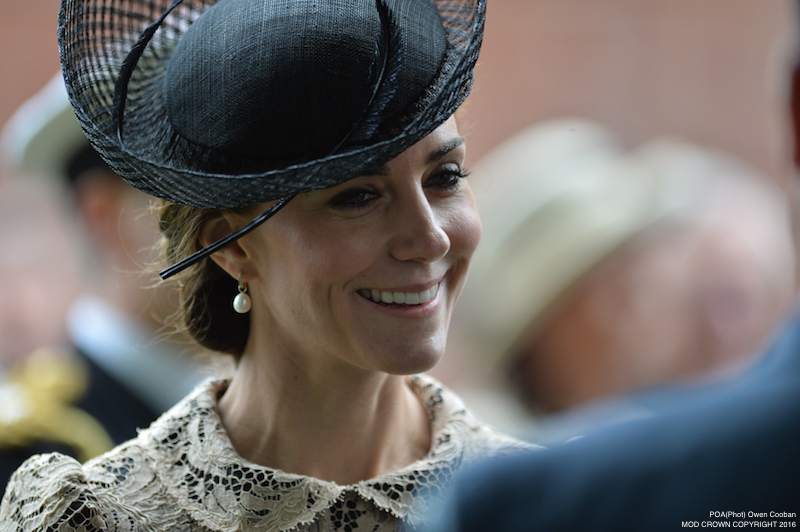 On Friday 1st July 2016, the Duke and Duchess of Cambridge attended a service to commemorate the 100th anniversary of the Battle of the Somme at the Thiepval Memorial in France.

The royal couple joined a number of other prominent royals and politicians at the service, including Prince Harry, Prince Charles, the Duchess of Cornwall, British Prime Minister David Cameron and French President François Hollande.

The service honoured the thousands of soldiers who died in the Battle of the Somme in 1916.

A reminder of the battle from the The Royal British Legion –

The Battle of the Somme was fought at such terrible cost that it has come to symbolise the tragic futility of the First World War. Its first day of conflict remains the bloodiest day in the history of the British Army and it was felt deeply at home.

Remembering the fallen soldiers, Prince Charles laid a wreath at the Cross of Sacrifice on behalf of the Royal Family and Great Britain. The 10,000 guests at the service also watched a film about the battle.

600 schoolchildren from France, Britain and Ireland laid wreathes on many of the war graves.

The three young royals spoke with the children afterwards.  According to The Sun’s Emily Andrews, Kate giggled as she attempted to speak her “GCSE level” French to the youngsters.

Prior to the service, William, Kate and Harry toured the newly renovated visitors centre, hearing from staff and speaking with children. According to reporters, Kate told children she was finding the visit “emotional” and “very moving”.

The royal family members each wore two brooches, a ‘bleuet’ cornflower and a poppy.  The flowers are symbols of remembrance in France and Great Britain, respectively.

For the service, Kate wore a cream and black lace dress with a Peter Pan collar, peplum waist and three quarter length sleeves.

Kensington Palace did not release the name of the designer on this occasion (see update below), but we do know the dress is made using Sophie Hallette lace. The textile designer confirmed this on Facebook.

UPDATE: At a later date, Jenny Packham confirmed she designed this dress.

You may recall Sophie Hallette was one of three companies that provided lace for Kate’s wedding dress and shoes?

Her hat ought to feel familiar too. It’s the Lion Tamer Perching hat by Sylvia Fletcher for Lock and Co.

How the company describe the piece:

Designed by our resident milliner Sylvia Fletcher, the Lion Tamer is a signature style in our Couture collection. Hand-sculpted from layers of dyed ebony sinamay and finished with a simple ostrich feather, it elegantly frames the face.

You may recall that Kate wore the hat to Trooping the Colour in June 2011, then again at a wedding in the same month.

Kate opted for the same accessories as the day prior.  She wore her black suede Mulberry Bayswater clutch:

Also, her Gianvito Rossi heels in the same material:

Note:  We *think* Kate wears Gianvito pump in the 105 style. If you’d like to copy Kate’s style, you can purchase the pumps from Net-A-Porter