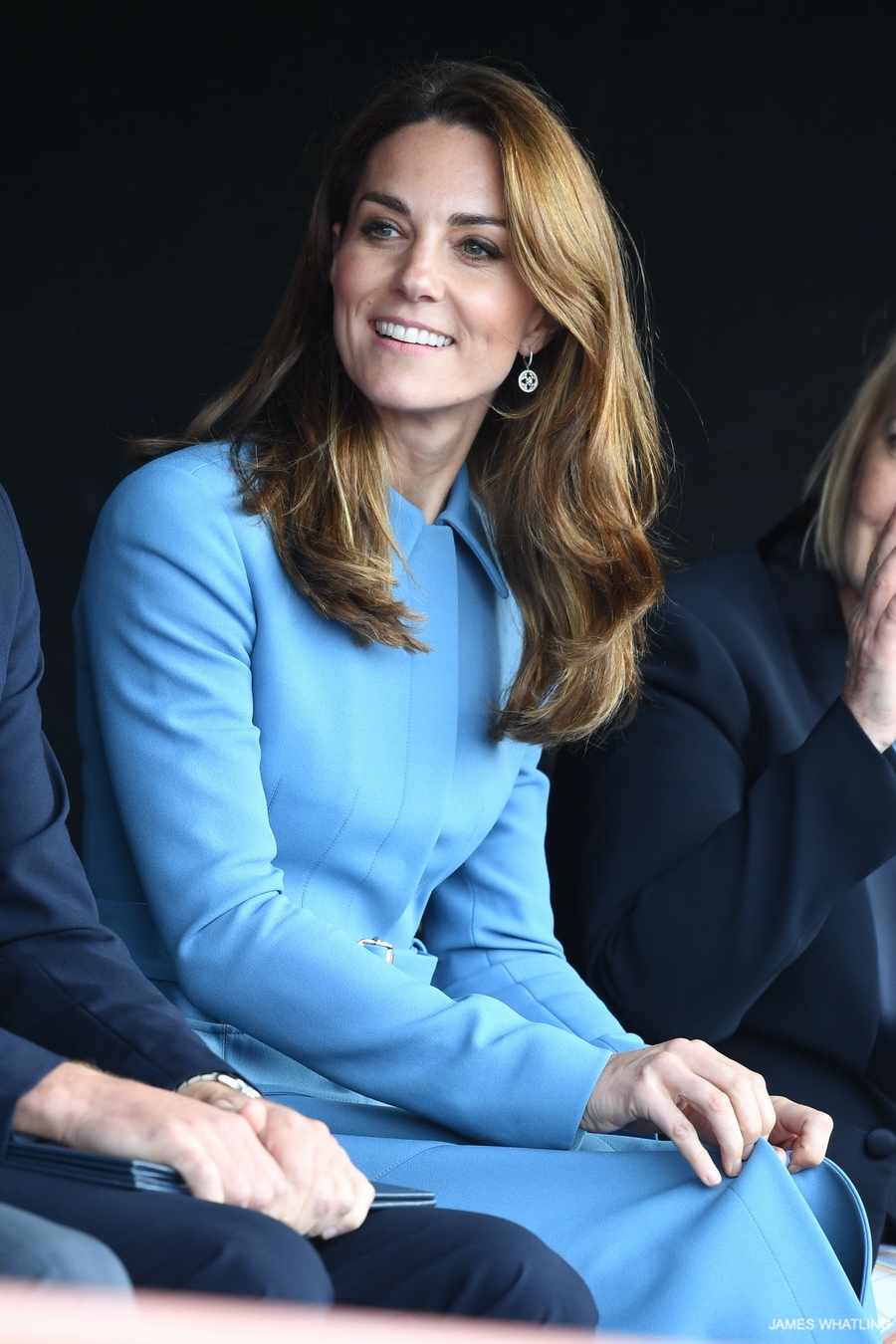 On the 26th of September 2019, the Duke and Duchess of Cambridge (Prince William and Kate Middleton) attended the Royal Ceremonial Naming of the new polar research ship, the RRS Sir David Attenborough.

The ceremony was the highlight of a three-day celebration of UK science, engineering and shipbuilding.

It took place at the Cammell Laird shipyard in Birkenhead, Merseyside, where the boat was built.  The shipyard began work in October 2016, the project took just under three years to complete.

The 130-metre long ship cost £200 million to build.  It is one of the most technologically advanced boats in the world.  It will take scientists on expeditions to the Arctic and Antarctic to conduct state-of-the-art multi-disciplinary research into the role that polar oceans play in our changing world.

During the visit, the royal couple toured the polar research ship before William delivered a speech to the gathered crowd. Then, Kate officially christened the ship as its sponsor:

This required Kate hitting a button that broke bottles of champagne on the ship’s side.  Sponsors and naming ceremonies are part of naval tradition dating back thousands of years.  They’re meant to bring good luck to the vessel, its crew and passengers.

A video of the big moment:

If you’ve followed our blog for a few years, you’ll remember heavily pregnant Kate performed the same role for the Royal Princess ship back in 2013.

You may recall the Natural Environment Research Council (NERC) launched a public poll to name the ship in 2015? The poll made headlines after 124,000 people voted for the name ‘Boaty McBoatface’. The judges decided to veto the name (sadly!) opting for a something more sensible: the RRS Sir David Attenborough. Of course, named after the English broadcaster, natural historian and national treasure. The nonagenarian himself also attended the event.

For those who’re sad the judges didn’t choose Boaty McBoatface as the ship’s name, never fear. The moniker was later given to a yellow submarine that will be deployed from the ship into deep ice. Here’s Kate looking at BoatyMcBoatface the submarine with A group of schoolchildren taking part in the British Antarctic Survey’s Polar Explorer programme:

The royal couple, along with Sir David Attenborough and the schoolchildren, also listened to a talk about the science behind the research.

After officially christening the ship, William and Kate met with locals who had come into the dockyard to watch the ceremony.

This is the fourth public outing for the coat. The Duchess first debuted the piece in April 2014 during a visit to the town of Blenheim, New Zealand.

Two months later, she wore it in Normandy, France during an event to commemorate the 70th anniversary of D-Day.

More recently, she wore the piece in 2016. This time for a reception in London marking the 75th anniversary of the RAF Air Cadets.

The coat is bespoke, created just for Kate. It features a peplum pocket detail, coordinating belt and a collar. It looks like the coat is a mashup of these designs from a previous McQueen ready-to-wear collection:

Kate wore a pair of block-heeled court shoes by Emmy London. They’re the ‘Josie’ style in blue suede. The Duchess first debuted the 3″ high pointed court shoes in May earlier in the year. They cost £395.

The Duchess carried a new handbag to the event today. With thanks to our friend Susan, we can confirm it’s the 1781 Pochette style by Asprey London.

The blue leather clutch bag comes with an optional shoulder strap, which Kate removed on this occasion.  It is stamped with Asprey’s 1781 logo and features the brand’s signature clasp in silver.  The bag retails for £1,850 at Asprey.com.

Kate’s earrings are from Mappin and Webb. They’re from the Empress collection. The company sell the Empress in different diamond weights and styles, so it’s difficult to say which pair Kate owns specifically.

The Duchess first debuted the earrings at Princess Charlotte’s christening in 2016. She’s worn them regularly since.

Do you love it when Kate repeats outfits or do you find it boring?  Do you like this coat or does it not do it for you?  Let us know in the comments section below or head over to our Facebook Page to further the discussion.  There are 98,000+ Kate fans ready to chat!