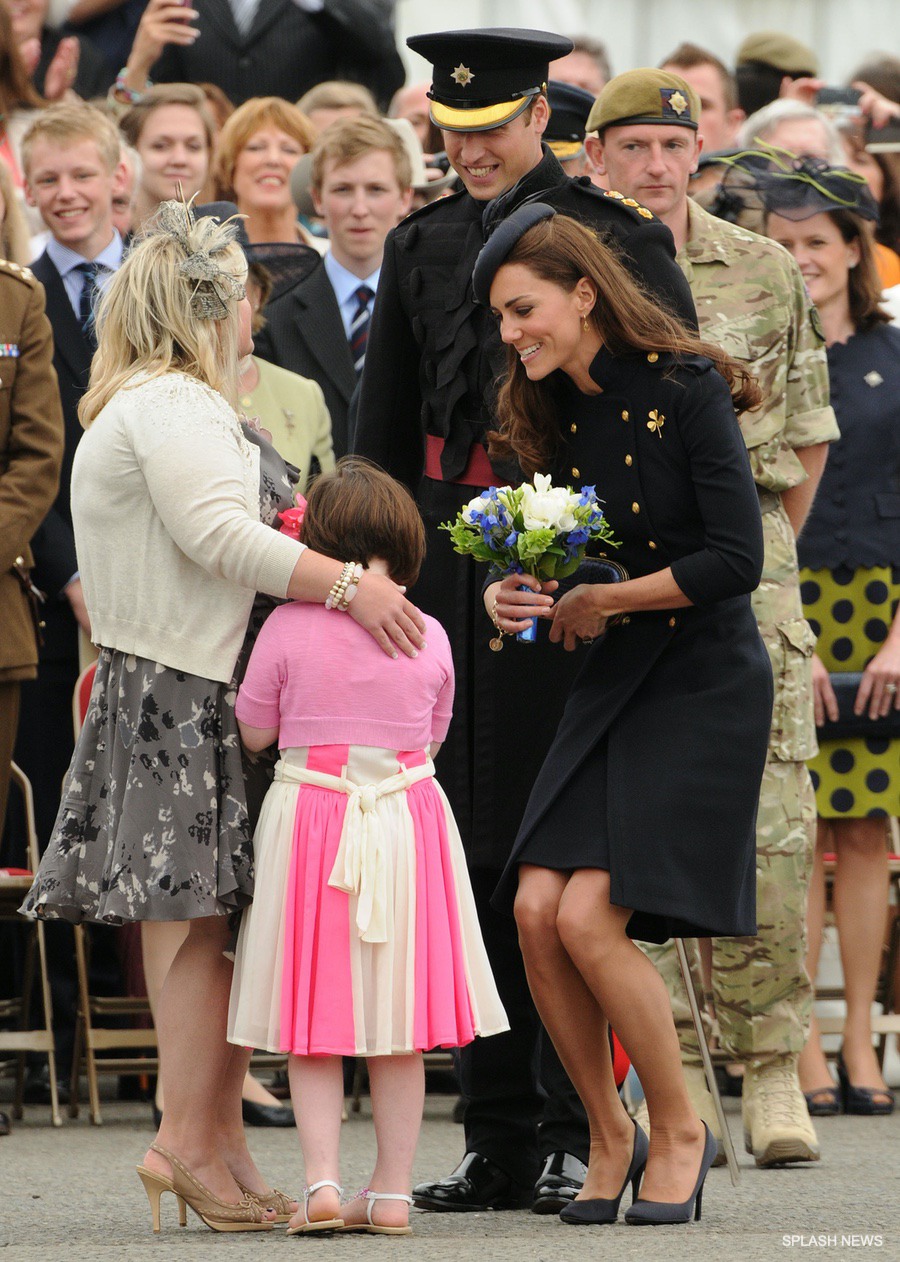 To mark Armed Forces Day in Great Britain on the 25th of June 2011, the Duke and Duchess of Cambridge (Kate Middleton and Prince William) attended a ceremony at Windsor’s Victoria Barracks. The Royal Couple presented medals to members of the Irish Guards.

The event was Kate’s first military role as a member of the Royal Family and we think she dressed the part!  Her ensemble was demure yet serious: very apt considering Kate met with families of the Irish Guards who had been killed in Afghanistan.

Kate chose a dark blue military-style coat-dress by Alexander McQueen. The designer label confirmed this in a tweet at the time.

Kate’s coat is doubled breasted, features a high collar, epaulettes and is adorned with gold buttons.

The coat is a bespoke design, created just for Kate. However, it does contain elements found in McQueen’s dresses and coats from the Pre AW11 ready-to-wear collection:

In keeping with the military theme, Kate wore a beret style hat in a matching blue colour. The hat has a bow embellishment on top.  It was by Rachel Trevor-Morgan Millinery.

Kate carried the Anya Hindmarch “Marano” clutch bag in blue.  The piece is made from shagreen (stingray) fabric and features gold hardware.

The jewellery designer describes the earrings as “a simple and extremely wearable style … perfect for adding a touch of colour to the face.”

The Duchess also wore a charm bracelet that was a gift from the Duchess of Cornwall. The gold piece features Kate’s monogram engraved onto a disk. Camilla’s monogram features on the other side of the disk.

Kate wore a gold and emerald shamrock brooch by Cartier. The brooch is a royal heirloom first worn by Queen Alexandra in 1901. It has been passed down to The Queen Mother and Princess Anne. It’s often worn by female members of the Royal Family associated with the Irish Guard. Learn about the history of the piece on this page. (Also pictured below on another occasion).

On her feet, Kate wore a pair of heeled court shoes. I think they’re by Alexander McQueen but this is unconfirmed.

I believe this because Kate owns a very similar pair we know are by Alexander McQueen. I don’t think they’re the same pair. The other pair appears to be a different colour blue suede: