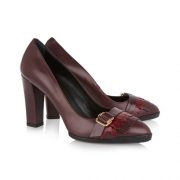 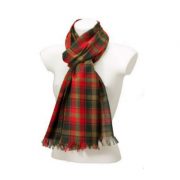 William and Kate spent the day five of the Royal Tour exploring Yukon in northwest Canada. 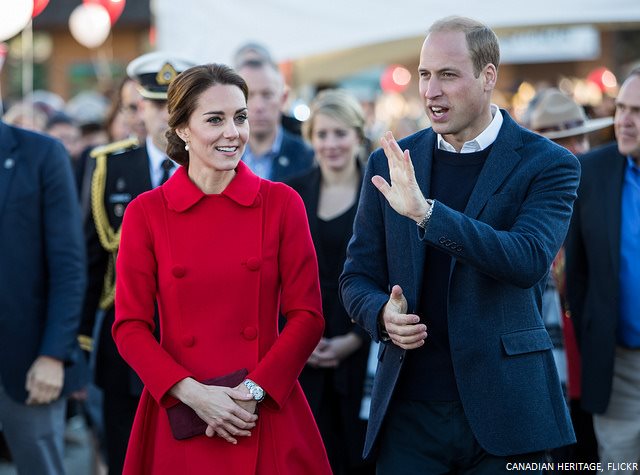 You may remember the Duke and Duchess flew in to Whitehorse, Yukon the day before to watch a cultural performance?  (You can read all about that here if you missed it).  The couple stayed in a nearby hotel overnight. According Kensington Palace, day five of the tour was designed to give William and Kate “a real chance to see the natural beauty of Yukon and learn about its people.” The people of Yukon turned out in their masses to welcome to the couple: William and Kate’s day began early (at 9am local time) with a visit to the MacBridge Museum.  Here, they toured through some of the museum’s exhibits, looked through children’s books published through the museum and spent time learning about Yukon’s fascinating history. The couple listened to a storytelling telling session with a group of local children. 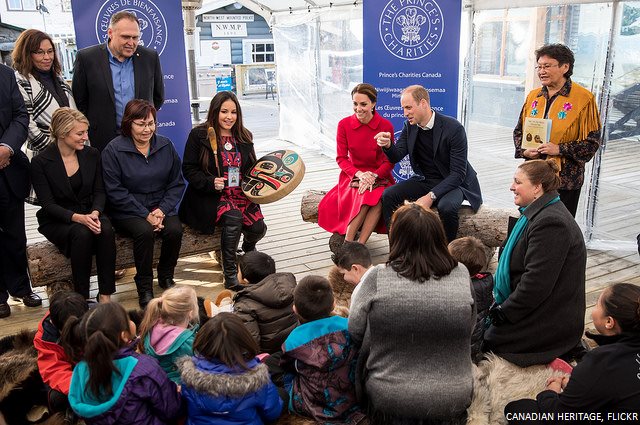 The book read to the children is called Hide and Peek.  It is a new tool designed to help children speak and learn some of the endangered languages spoken in the territory.   It uses modern technology to teach ancient languages:

Using a free app called Aurasma, children and their parents hover their digital devices over the pages, triggering videos of Indigenous elders reading the stories out loud. After watching and listening to closeups of an elder’s mouth, the kids and parents get to practice the enunciation before the video goes to the next page. There’s a really fascinating article about the book, the technology used and Prince Charles’s involvement on Macleans.ca here.

The book features a character called William the Moose.  This prompted the following reaction from Kate!

Next, we saw a new first from the couple: their first ever tweet:

THE DUKE AND DUCHESS OF CAMBRIDGE, SEPTEMBER 2016, WHITEHORSE YUKON

The couple sent the tweet from the Dominion Telegraph Office at MacBridge Museum. 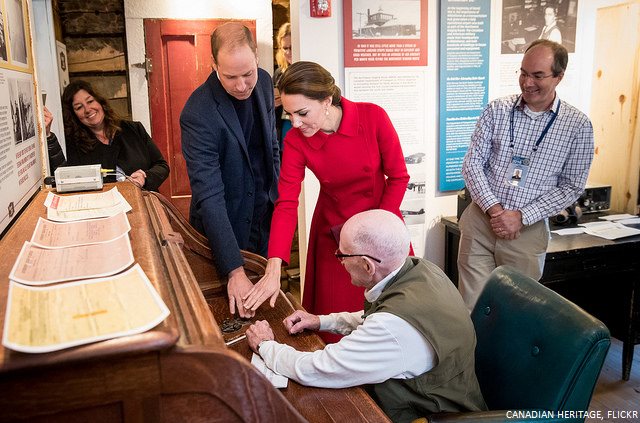 The tweet launches the Museum’s new “Telegraph to Tweet” initiative.  The tweets are transmitted via the telegraph using morse code and uploaded to a virtual guest book on Twitter.  A quote about the special sceme from MacBride Museum Board Chair Keith Halliday:

“This new Telegraph-to-Tweet feed is a hands-on way for museum visitors to connect the Yukon’s past to its present.  We are honoured that Duke and Duchess of Cambridge were the first to sign their names on our virtual guest book, and we invite all Yukoners and visitors to our territory to sign their names alongside the royal couple.”

The telegraph arrived in Yukon back in 1900.  It ended the near-total communications isolation for the territory.  The Queen and the Duke of Edinburgh visited the same telegraph office, now part of the museum, In 1959.  90-year-old telegraph engineer, Doug Bell, assisted William and Kate couple with the transmission.  He recalls the Queen’s visit with fond memory. Next, the couple made their way to Main Street in Whitehorse for a colourful and fun party celebrating what the area is best known for, its thriving arts scene. 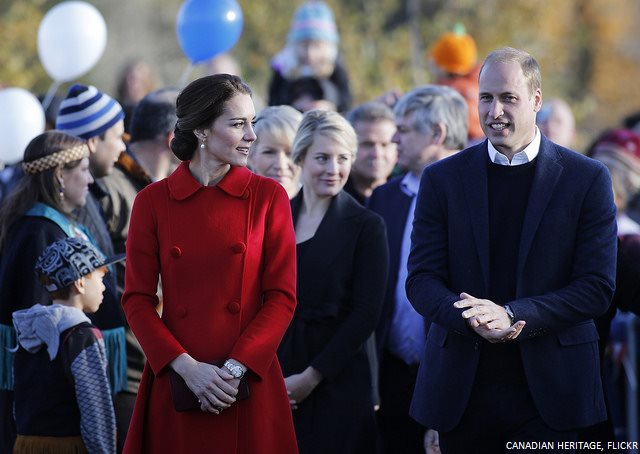 “While the project continued on its journey to be completed, each carved wood chip was collected to be burned in a ceremony, as a symbol of the people impacted by residential schools experience and also by effects of drugs & alcohol.  A portion of ashes was saved from the burning of the chips ceremony and placed into the totem.”  NorthernCulture.org Kate dressed primarily in red, Canada’s national colour.   Her coat is by Carolina Herrera, from the designer’s ready-to-wear brand. 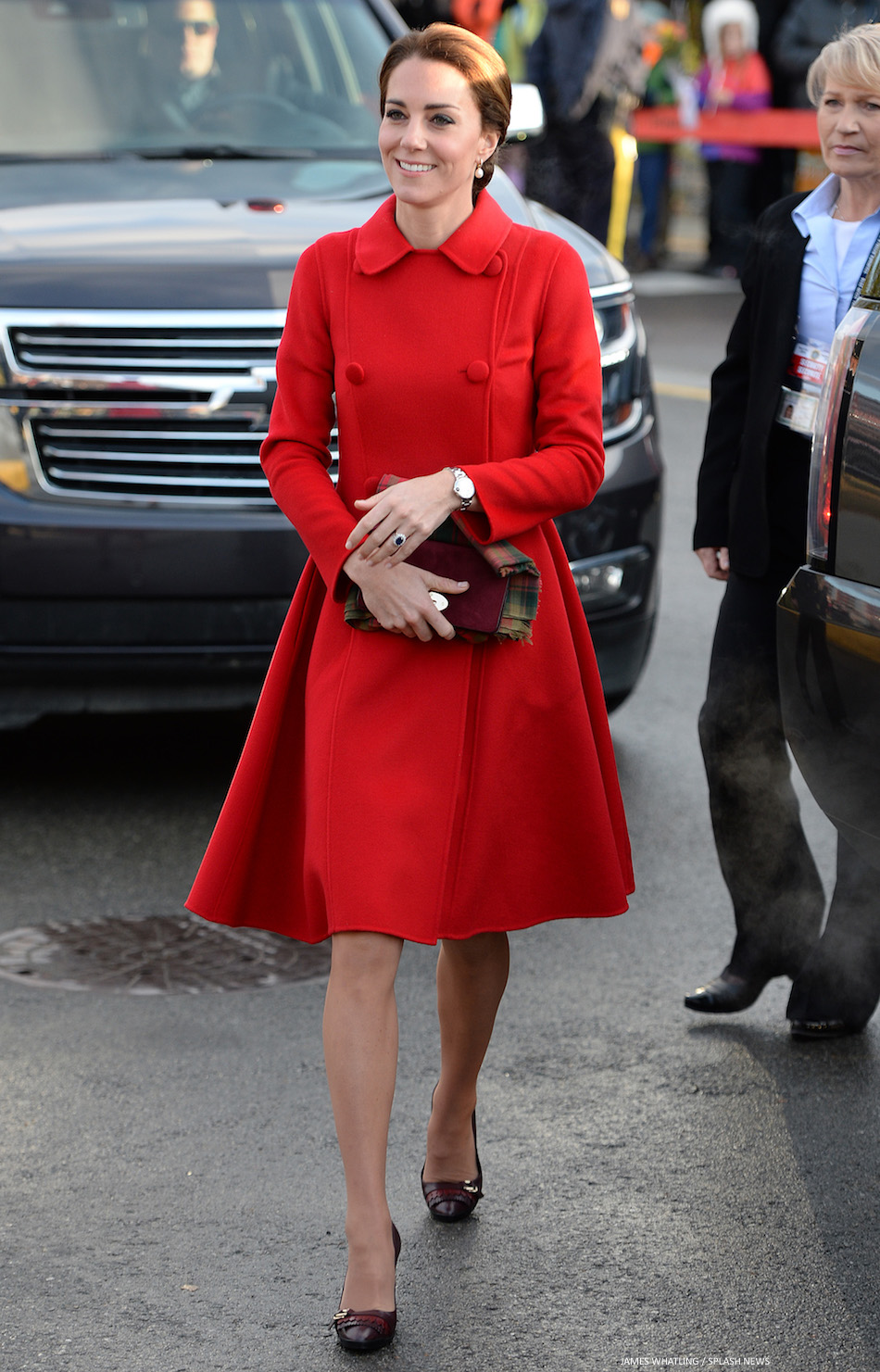 Susan from WhatKateWore.com contacted the brand to discuss the coat.  A rep confirmed it’s new in-store, but not online yet.

Kate paired the Carolina Herrera coat with a new (to us) pair of shoes. 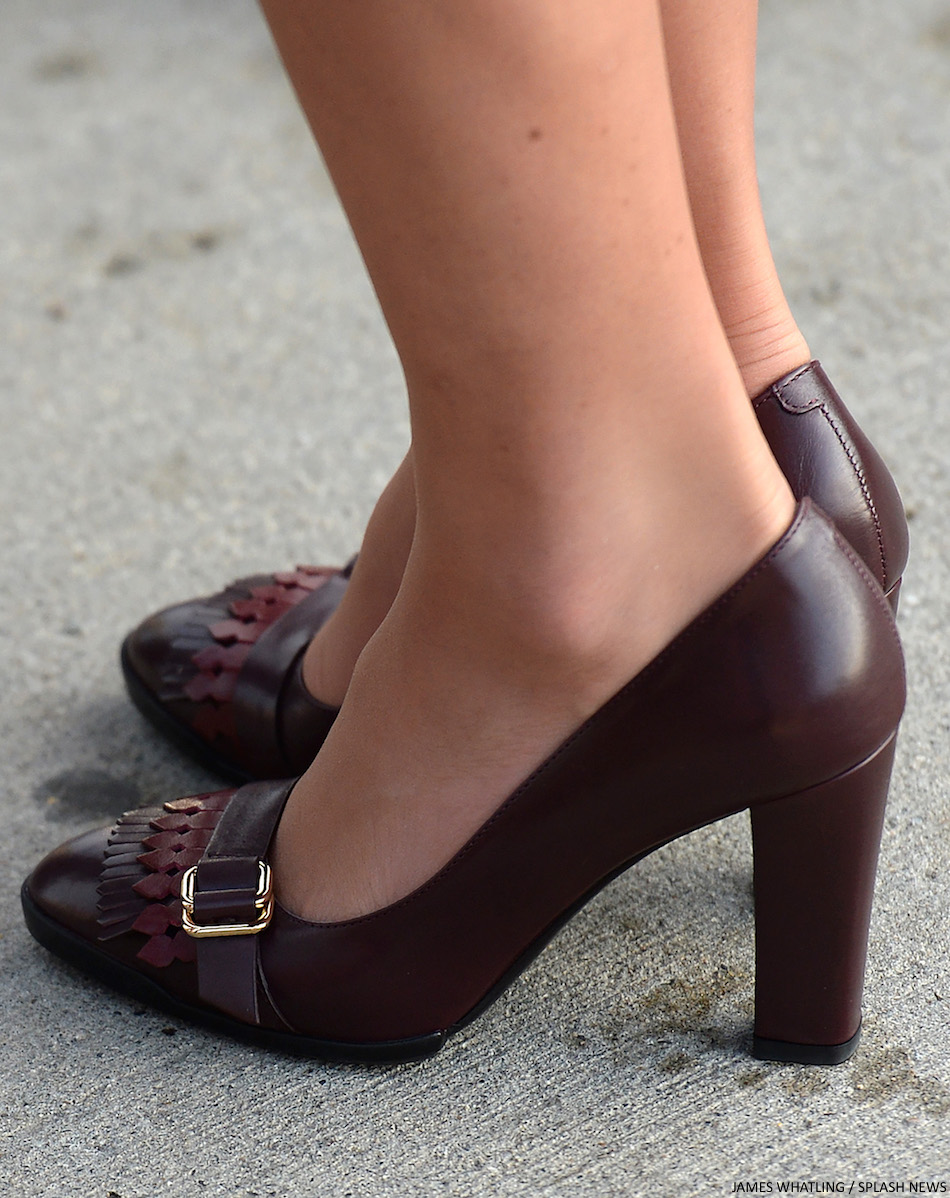 They’re the Tod’s Fringed Leather Pumps from the company’s 2015 collection.  (Thank you to @Bojana on Twitter for finding them.)

They’re made with burgundy coloured leather (though the official colour name is ‘eggplant/cherry’). 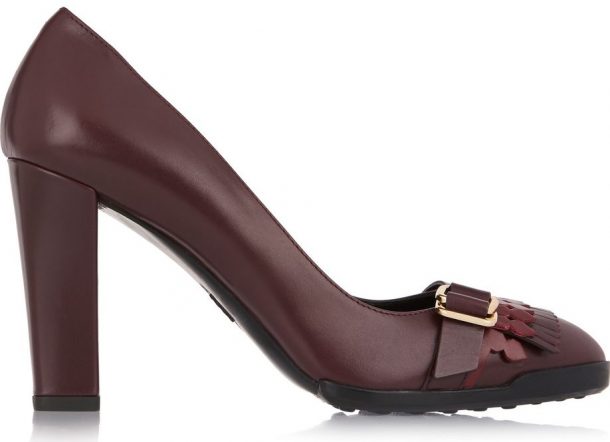 “Ideal for both the office and off-duty days, Tod’s’ versatile burgundy pumps have a sturdy block heel and cushioned footbed for round-the-clock comfort. This Italian-made pair is finished with an elegant gold buckle and the brand’s signature pebbled sole.”

There’s a similar version of the TOD’s shoe available at MatchesFashion.com if you’re looking for something similar.  They are made from the same burgundy coloured leather, also have fringe detailing at the front and a block heel.  They cost £390 (around $505 USD). Kate’s Mulberry Bayswater clutch in Conker made a return for the visit to Yukon. 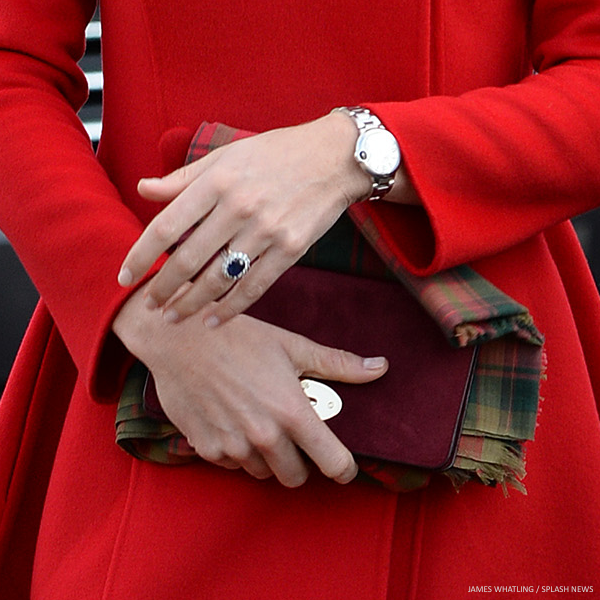 The Duchess carries the clutch in three different colours (including black and cream suede) – find out more here. As you can see above, Kate carried her Maple Leaf Tartan scarf for a second day running.  The scarf is manufactured by York Scarves, but the company only sell wholesale:

“Made exclusively for York Scarves most of these designs are registered at the Scottish Tartan Registry.  They are woven in a deep classic twill weave from 100% pure cotton” I asked her to confirm the scarf has the YS logo on a black label like Kate’s. It does!  Click here to shop. 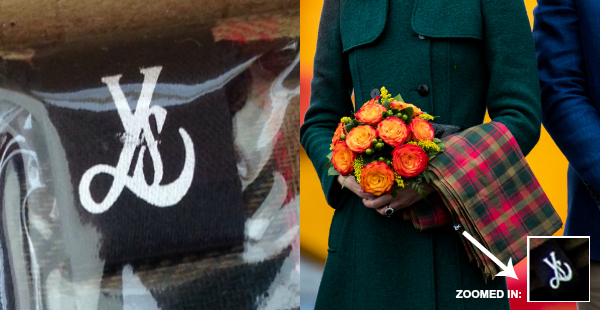 The Duchess accessorised with her Annoushka Pearl Earrings, which she wears with Kiki McDonough Diamond Hoops.   The Duchess regularly wears these earrings back home. 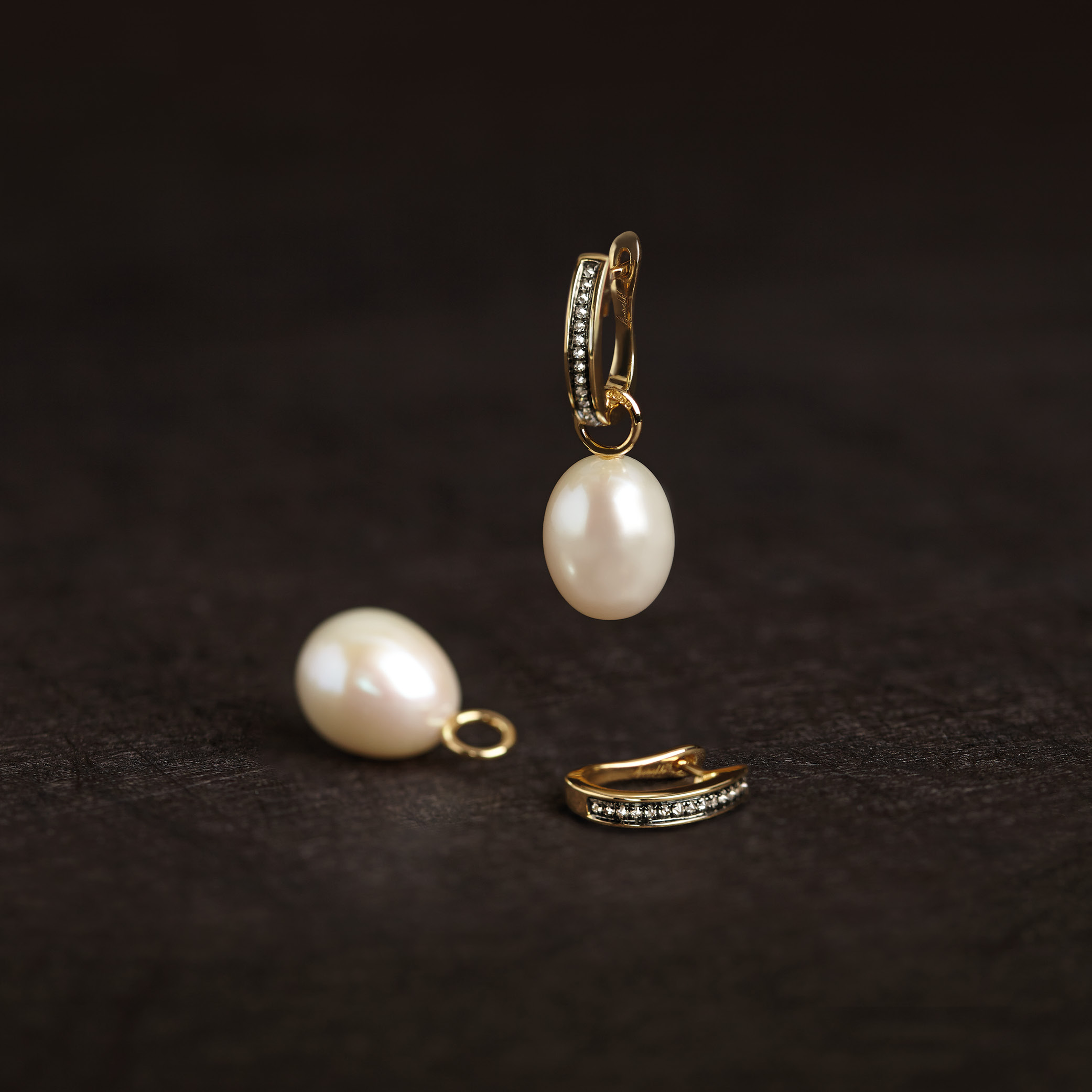 The Freshwater Baroque Pearl Drops can be purchased for £295 (around $383 USD) at Annoushka.com. Kate wears them on Kiki McDonough’s 18ct Yellow Gold and Diamond hoops, which retail for £500 (around $650 USD).

A note:  For the afternoon’s events in Carcross, the Duchess changed outfits.  You can read more about that here.