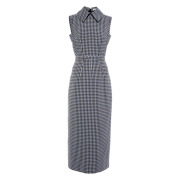 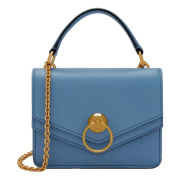 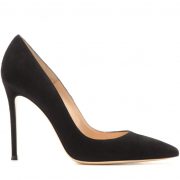 On her third and final day in Boston, Kate Middleton visited The Center of the Developing Child at Harvard University.  For her penultimate engagement in the city, the Princess wore a fitted houndstooth dress by Emilia Wickstead—a polished, professional and elegant look, I’m sure you’ll agree.

Kate visited the Center as part of her mission to champion the importance of the Early Years—the first five year’s of a child’s life.   Science shows these first years “set the tone” for one’s life as children’s brains are built as they interact with their environment.   The quality of a child’s early experiences makes a critical difference as their brains develop, providing either strong or weak foundations for learning, health and behaviour throughout life. (Source: Unicef)

The Princess wants to elevate the status of the Early Years and have it seen as one of the most vital and strategic issues of our time.

According to the BBC, a royal aide said Kate feels early childhood is the “social equivalent to climate change” and that it’s not discussed with the same seriousness.

The Princess has spent the last few years trying to amplify the Early Years and achieve her mission. You’ll remember she launched the Centre for Early Childhood through The Royal Foundation last year.

She also recently published an op-ed in The Telegraph explaining that if we nurture children, it’ll create a “happier, healthier society”. She urged for greater focus on the first crucial few years for children.  The Princess warned that “not enough is being done [to help the under fives]”.

The Harvard Center on the Developing Child focuses on leveraging advances in science to inform the policy landscape and to increase the impact of programs.

Kate arrived at Harvard University and signed a guest book before speaking to researchers about how advances in science can improve the lives of children everywhere.

On her way out of the Center, Kate conducted an impromptu walkabout.

Let’s take a proper look at her outfit now.

In the words of The Telegraph’s Acting Senior Fashion Editor Tamara Abraham, the black and blue houndstooth dress was a “strong fashion look” for the Princess.

The midi dress is an Emilia Wickstead design.  It features a black and blue houndstooth print with a collar and a thin belt around the midsection.  Wickstead created a bespoke version of the Miles dress ($1,202) with added sleeves.

Here’s how the designer describes the ready-to-wear piece:

A versatile dress that transitions effortlessly from the office wear to event dressing with minimal effort. Crafted from a lightweight quality of textured georgette, this sleeveless pencil dress features a houndstooth print that accents the tailored fit of the piece.

The New Zealand born designer sells a number of items in the same blue and white houndstooth print, including a skirt and two other dresses.

My longtime readers will know Emilia Wickstead is one of Kate’s favourite designers.

Wickstead, now based in London, has become the epitome of modern femininity. Her collections are held in some of the most prestigious stockists in the world, including Net-A-Porter, Matches and Moda Operandi.

The front flap features double-layered detailing and is finished with the brand’s signature Rider’s lock.

I believe Kate carries Mulberry because of the brand’s commitment to sustainability.  The company are aiming for a regenerative and circular supply chain (they’re currently restoring over 10,000 bags per year), their UK factories are carbon neutral, they aim to emit zero Scope 1,2 and 3 emissions and greenhouses gasses by 2035.   Plus, they’re pioneering a hyper-local and transparent ‘farm to wardrobe’ supply chain.   There’s plenty more too—you can read more about Mulberry’s aims at thewalpole.co.uk. Kate’s been championing sustainable and eco-friendly brands for the last two years now.

Unfortunately, you cannot buy the smart, compact Harlow bag today.  Mulberry have discontinued the style.  Try the Amberley Satchel if an adorable new handbag is on your Christmas list:

OK—it doesn’t have a top handle (the Amberley is designed to be worn on the shoulder or cross body) but it’s a similar size, it features the same gorgeous Rider’s lock and it’s the same tone of blue.

With the Amberley Satchel Kate debuted on Wednesday, this takes her total number of Mulberry bags up to 11.  I’m just counting those we’ve seen her carry since marrying into the Royal Family.  I know she’s carried other styles before that too.

Let’s move on to Kate’s earrings now.  They were also new (to us at least),  The Palace confirmed they’re from a London-based jeweller, Lenique Louis.  I am pretty sure I read that Ms Louis confirmed Kate wears a bespoke, smaller version of her ‘spine hoop earrings‘—but don’t quote me on that!

The £285 earrings are handcrafted by Lenique Louis in her London studio.  The gold vermeil earrings are inspired by coral reef.

Lenique is a Brand Ambassador for The Prince’s Trust.  She met the then Prince of Wales and Queen Elizabeth at an event in 2014 and was able to showcase her jewellery to the two royals.  Her work has been featured in Vogue, Marie Claire and Harpers Bazaar.

And finally, a quick look at Kate’s shoes.  They’re the Gianvito Rossi 105 pumps in black.  The Princess has owned the black suede pumps for quite a while now.  They feature an elegant, slim heel and a pointed toe.

They remain available to buy at Net-A-Porter and MyTheresa.

Kate’s worn the shoes frequently over the last few years. She owns—six maybe seven—pairs in this style by the same designer. 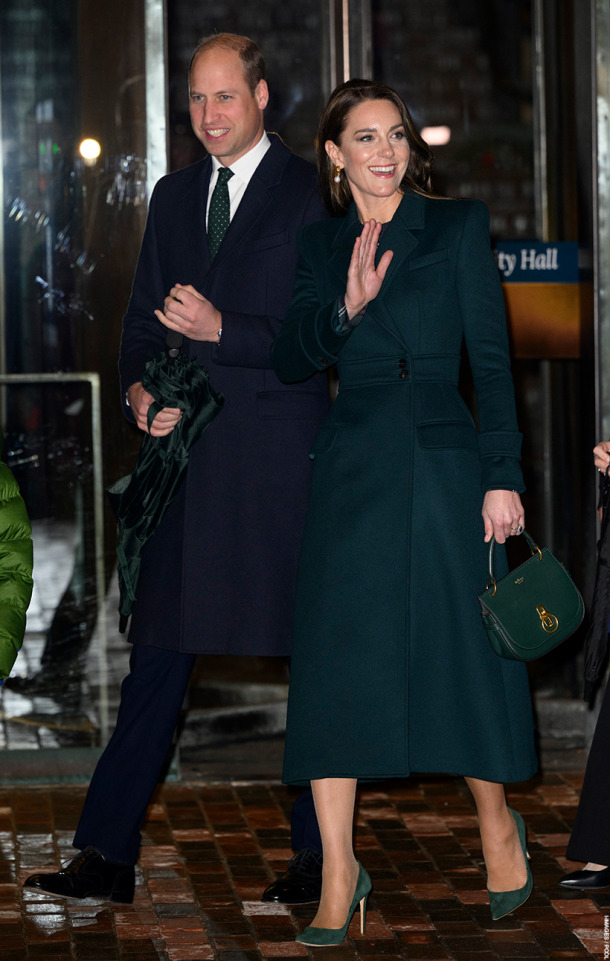 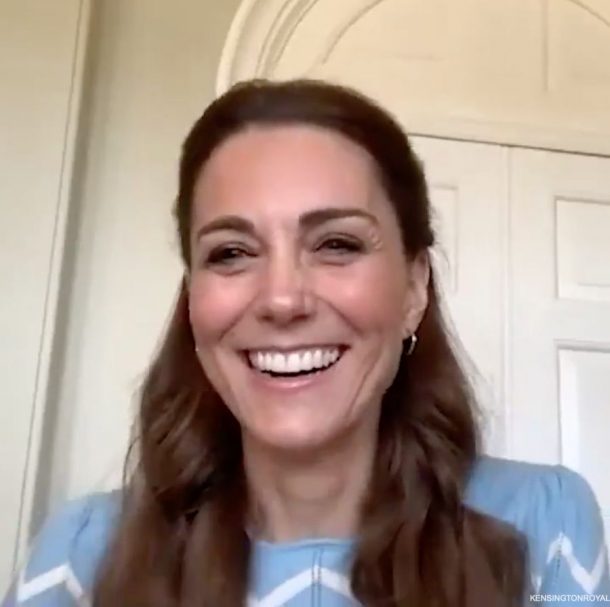