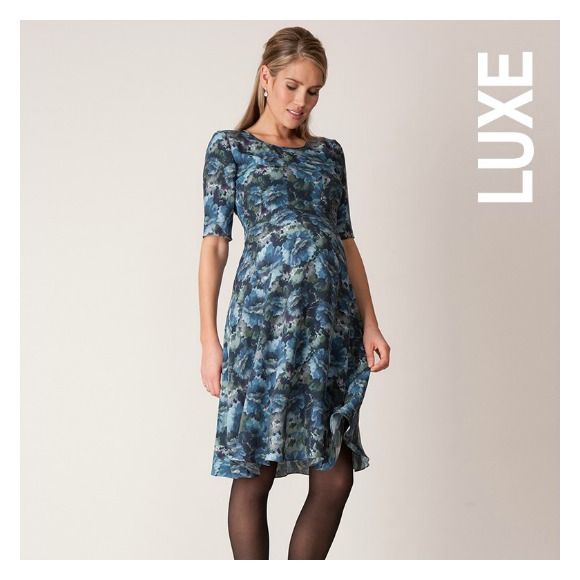 During her three pregnancies, Kate wore at least 9 items from maternity brand Seraphine. She wore the company’s ‘Florrie’ dress while pregnant with both Charlotte and Louis.

Kate first wore Seraphine’s Florrie Dress in January 2015, to visit Family Friends in Kensington, London.  A month later, she wore the maternity dress a second time, for a visit to the Emma Bridgewater factory in Stoke-on-Trent, Staffordshire. In 2018, she wore the dress for a third time, to visit Reach Academy in London.

Seraphine describes the digitally printed dress as “marine ocean” blue.  The dress is cut with a curved empire line that defines your waist, and it features stylishly cropped sleeves.

Seraphine say the dress drapes beautifully to finish just above the knee, allowing plenty of movement and a flexible fit for before, during and after pregnancy.  The dress is made from crepe de Chine.

Seraphine first launched the dress as part of their spring/summer 2015 collection. Sadly, it is no longer available to purchase today. Try eBay?

The maternity brand opened its first store 10 years ago on Kensington Church Street.  Séraphine is a celebrity and royal favourite – as well as the Duchess, Angelina Jolie, Jessica Alba, Halle Berry, Kate Hudson and Sienna Miller have all worn items from the company.

Kate’s chose maternity clothing by Seraphine for all three of her pregnancies.  In addition to the Florrie dress, she has worn the Knot Front Wrap Dress in fuchsia pink.  Here’s a picture of Kate wearing the dress on the cover of OK! magazine shortly after the birth of Prince George:

She’s also worn a couple of coats, a pair of maternity jeans and several other dresses from the maternity wear brand. View all pieces here.

You can view more of Kate Middleton’s maternity clothing (from other brands too) here. 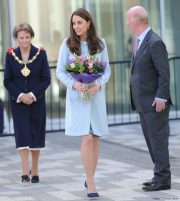