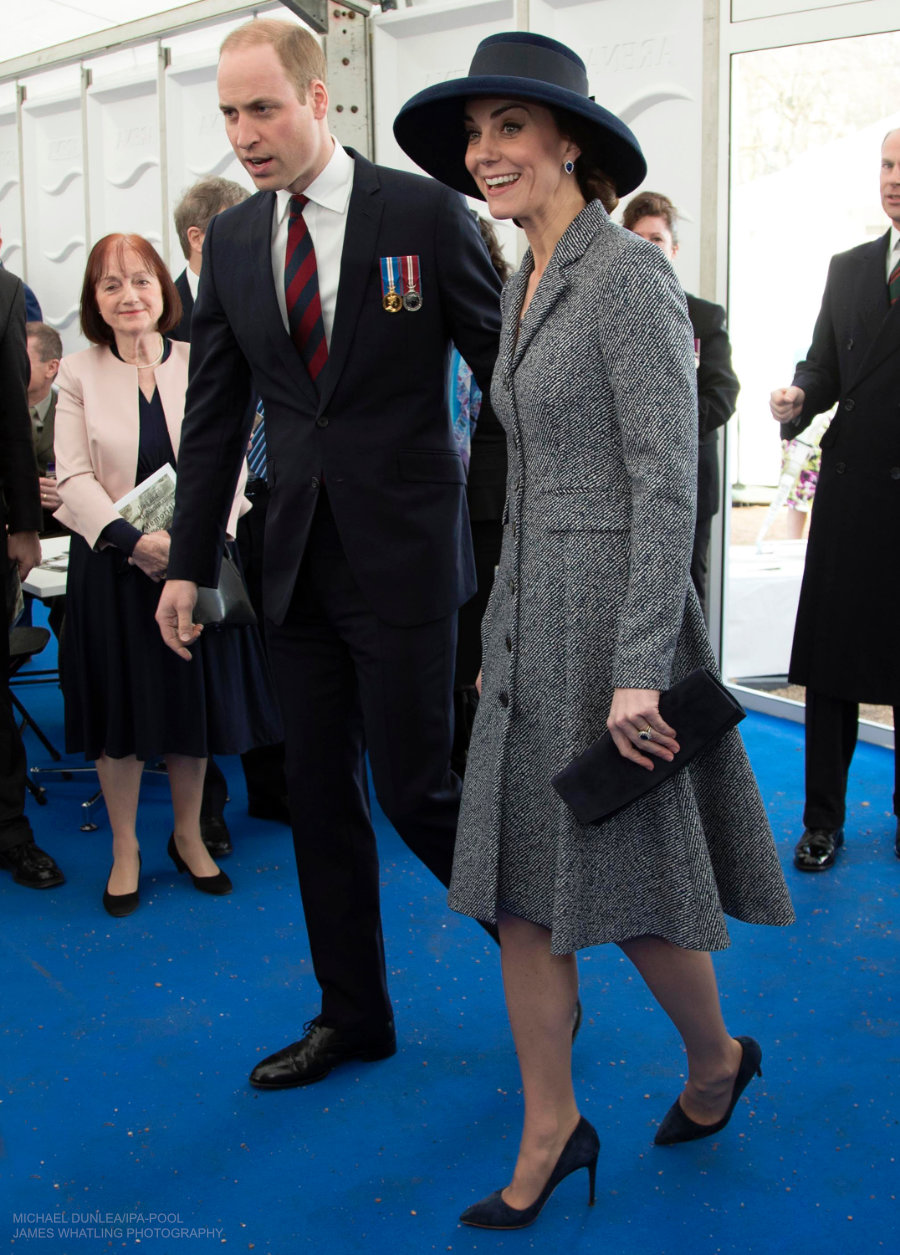 This morning, William, Kate and Harry watched as the Queen unveiled a new memorial at the Victoria Embankment Gardens in Westminster, London.  The new memorial honours the UK Armed Forces and civilians who served their country in the Gulf region, Iraq and Afghanistan, and those who supported them back home, from 1990-2015. 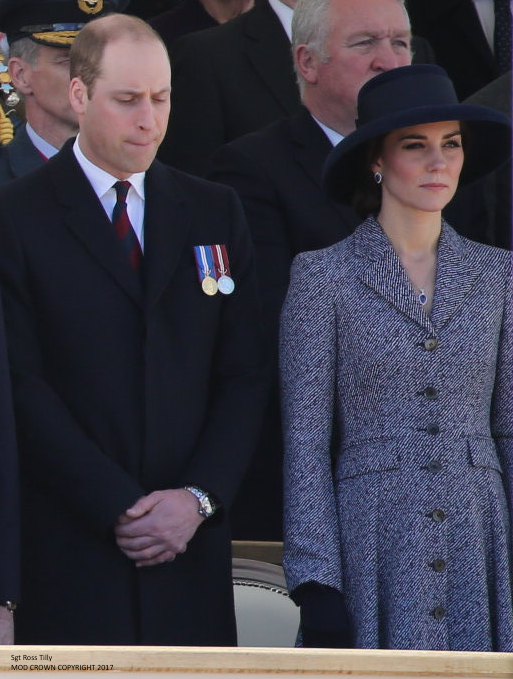 The memorial will stand as a permanent reminder of the contribution and sacrifice that so many members of our Armed Forces, aid workers and civilian personnel made towards the security of the United Kingdom and the interests of Iraq and Afghanistan. Their efforts underline our on-going commitment to support the people of this region in building a more stable future which will help keep Britain safer and more secure.  — Sir Michael Fallon, Defence Secretary 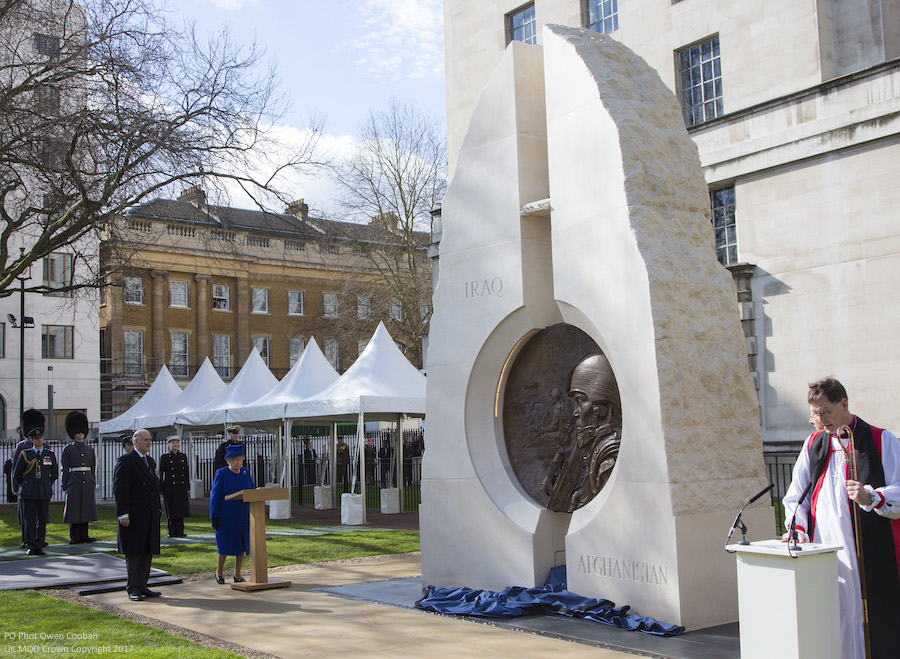 Paul Day, the British sculpturist, designed the monument.  He also created the Battle of Britain monument on the Embankment, the Queen Mother’s memorial statue on the Mall and the Meeting Place, the sculpture of an embracing couple in St Pancras station. 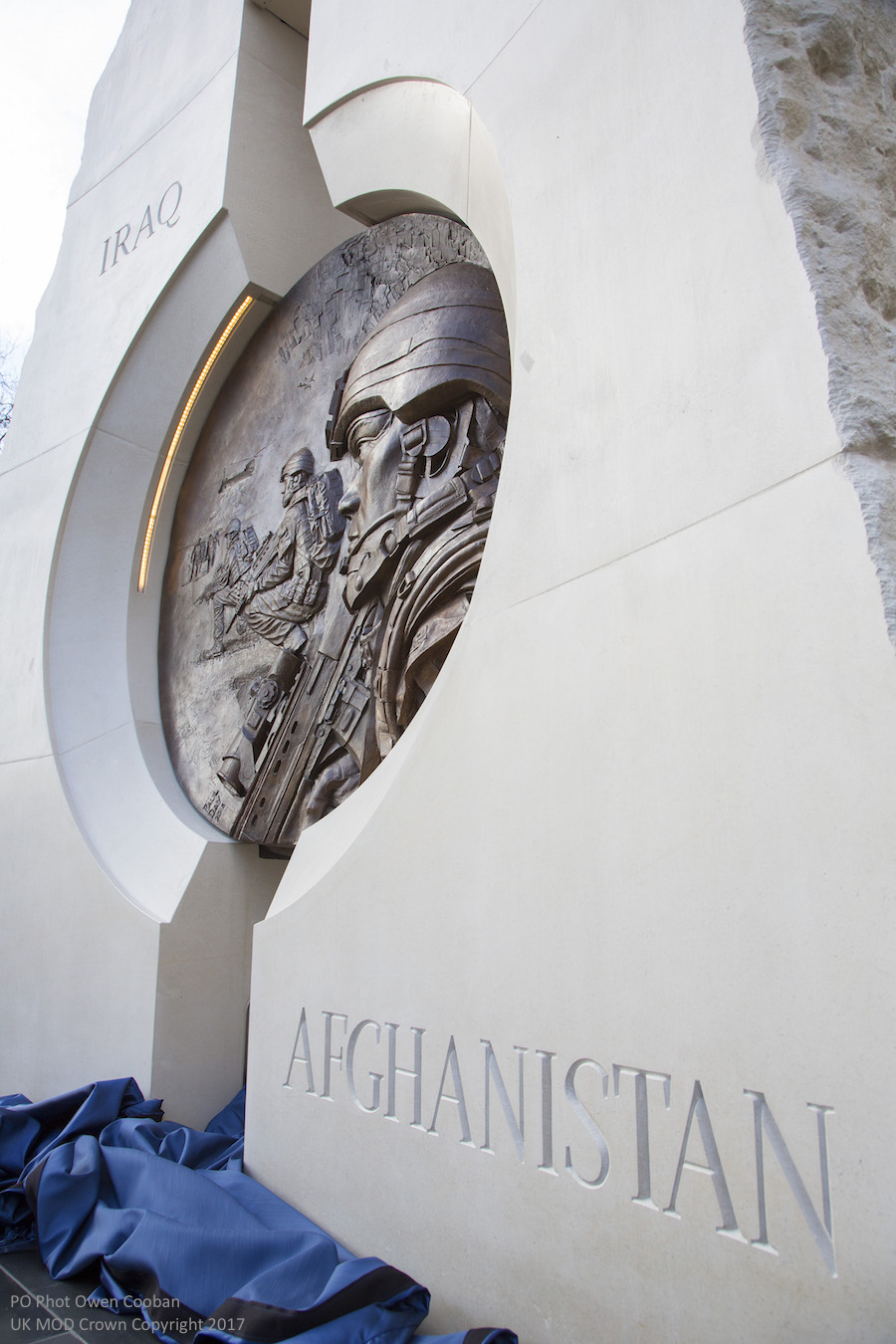 The Iraq/Afghanistan monument is formed from two stone monoliths that support a bronze medallion.  It’s crafted from Portland stone and finely carved on three sides.  The fourth side is left jagged and rough to suggest the rocky terrains of Iraq and Afghanistan.

Shortly before the unveiling, William, Kate and other members of the Royal Family joined 2,000 invited guests at a Service of Dedication at Horse Guards Parade in London. 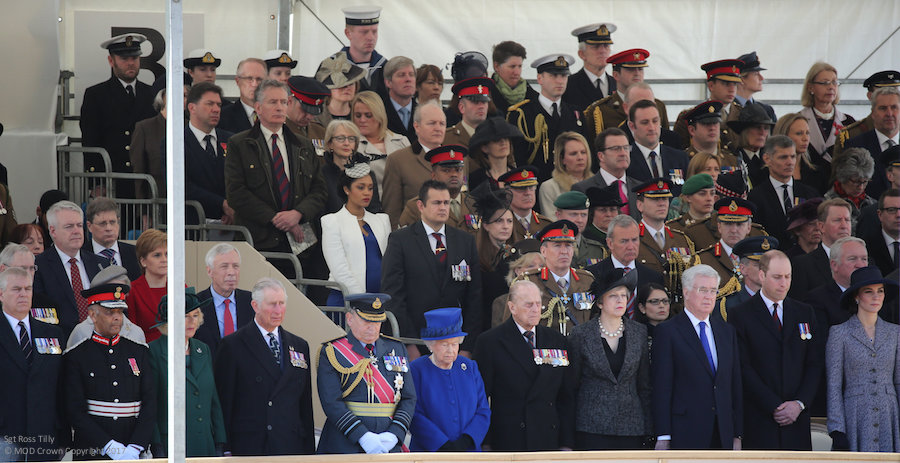 Guests included current Service personnel, veterans, representatives of departments and bodies including the Foreign and Commonwealth Office and the National Health Service, and representatives of various charities and aid organisations.  Current Prime Minister Theresa May and Chancellor of the Exchechquor Philip Hammond also attended. 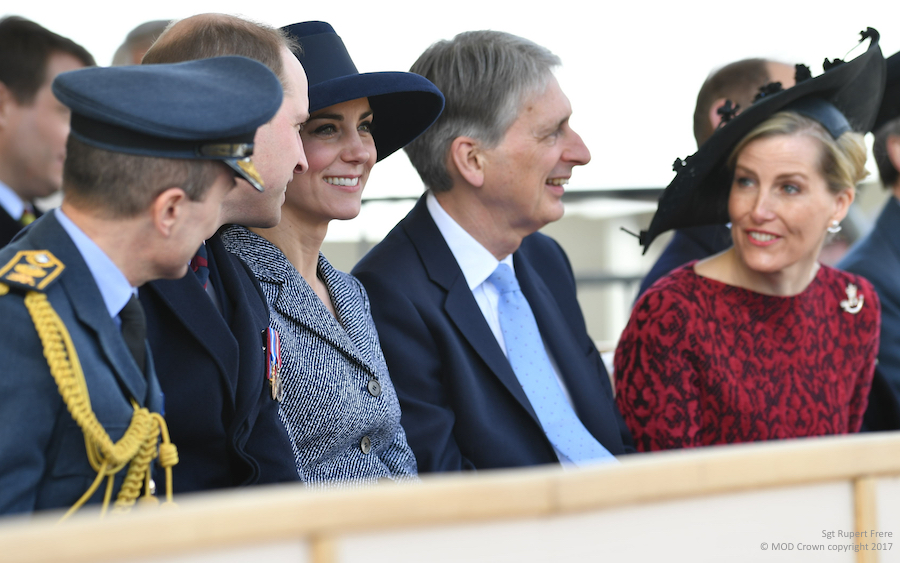 At the start of the ceremony, Prince Harry said a few words. After the service and unveiling, the royals attended a reception on Horse Guard Parade. For the occasion, Kate chose to re-wear the coat she first debuted in Australia 2014.  It’s a blue twill piece from Michael Kors‘ spring/summer 2014 collection.

Kate wore the piece more recently, in May 2014, to officially open the Magic Garden at Hampton Court Palace.  Here’s a look at Kate on that day: 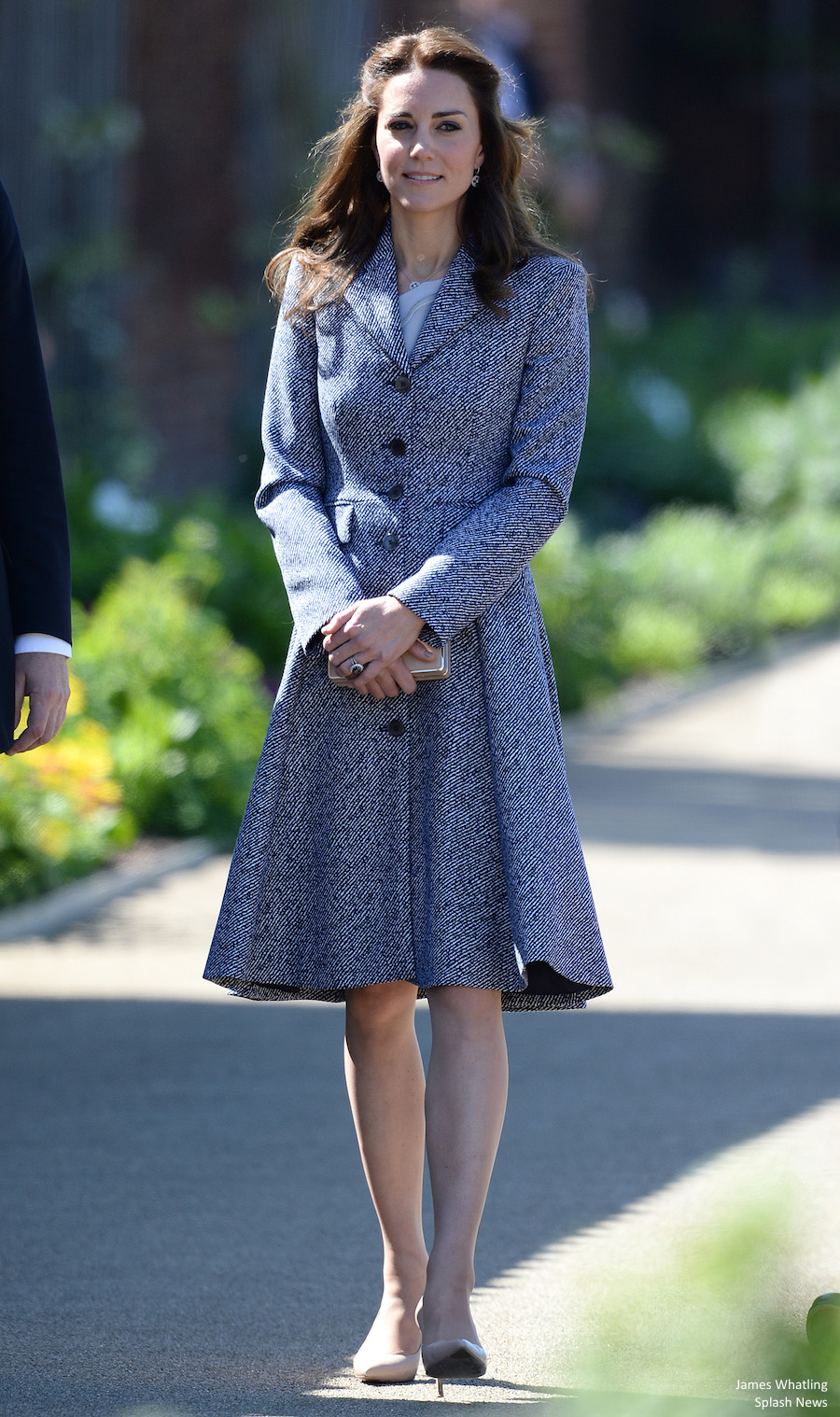 Kate brought back a familiar earring and necklace set for today’s engagements: They’re the tanzanite set from G. Collins & Sons.  Kate first debuted them exactly two years ago, for the Afghanistan service of commemoration at St. Paul’s Cathedral. She also wore them last year on the first day of the Canada Tour. The striking set feature tanzanite stones and diamonds that are set in platinum.  Below, we picture similar pieces the company have designed: Kate wore a pair of coordinating blue gloves for the service today.   The blue gloves feature bow detailing on the cuff.

We do not have a confirmed ID for the gloves at the moment.

Kate wore a new hat to today’s service.  It’s the Tiffany drop-brim hat from Lock & Co.   It’s crafted from 100% rabbit fur felt and features a wide Petersham band and a bow on the back.

The hat is available in both black and blue and it costs £325 (around $395).  Thanks to Michelle for finding the hat. The Duchess owns this clutch bag in four different colours (navy suede, brown suede, black suede and nude). The bag is sold as the “muse” here in the UK. It’s known as the “Raz” in America.