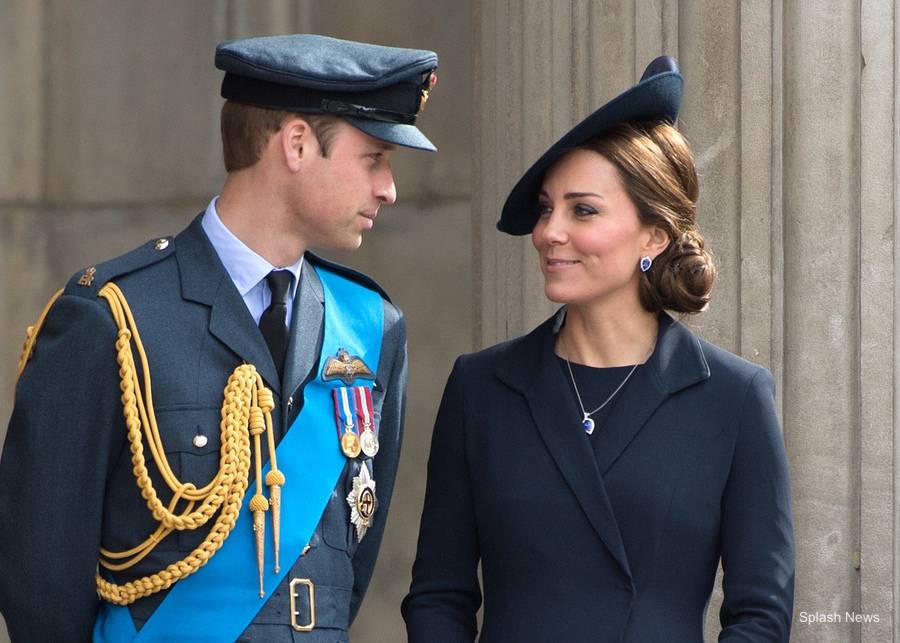 This morning, The Duchess of Cambridge joined other members of the Royal Family, along with the Prime Minister, Deputy Prime Minister, Secretary of State for Defence, Service Chiefs and other senior political and military figures for a commemorative service to mark 13 years of UK military operations in Afghanistan, at St Paul’s Cathedral, London.

The service recognised the contribution of the Armed Forces, organisations and all those in the UK who worked to make Afghanistan a safer and more stable country.  The tribute also honoured the 453 Service men and women who lost their lives during the campaign.

A video of the Duke and Duchess arriving:

Once the Queen and Prince Philip arrived, the royals walked to their seats following senior clergy.

Hymns were sung during the service and the congregation were welcomed to pray. The Very Reverend Dr David Ison thanked the commitment of the nation’s service personnel.  He went on to say:

We commemorate with sorrow and regret those who have died in these operations and pray for their families and friends and for all who mourn their loss.

We remember those who have been injured in body, mind and spirit and we pray for their continued wellbeing and for those who especially support them.

The Prime Minister paid tribe to those who fought in Afghanistan.  A cross made of shell casings from the memorial at the main allied base in Afghanistan, Camp Bastion was brought through the cathedral by representatives of the three forces and presented at the altar.

After the service, The Prince of Wales took salute from the South Transept Porch of the Cathedral, as personnel from the Royal Navy and Royal Marines, the Army and the Royal Air Force, and veterans, supported by military bands and pipes and drums make their way from St Paul’s Cathedral to the Guildhall.

During the parade, aircraft conducted a fly-over in tribute.  Photo via the Ministry of Defence:

You can watch the full service here:

As this is a style blog, I always take a look at the outfit Kate’s worn detail – even on the sombre engagements like this one.  The Duchess looked wonderful in head-to-toe navy blue, a perfect colour for such an occasion.

Here’s how the company describe the coat:

London-made, fluted coat is supremely flattering, this luxe version made of 100% wool for warmth and comfort. It’s nipped-in waist is elegantly contrasted with the soft folds at the hem. The fabric is thick enough to keep you warm without being too bulky or weighty.

Beulah originally sold two versions of the Chiara coat.  The first was part of Beulah’s AW14 collection and was made from Acetate/Viscose.  It was priced at £395.  The remaining units of this coat sold out quickly after Kate wore it. Beluah sell a second version of the coat made from 100% wool, at a price of £650.  This is still in stock (at the time of writing). It is not confirmed which of the two coats Kate is wearing today, though it’s thought she’s wearing the wool version.

The “trapeze overcoat” also comes in white and dusky pink:

Beulah London confirmed that Kate is not wearing one of their dresses under her coat; this remains a mystery for now.  (Hat tip to WhatKateWore.com for emailing Beulah and receiving confirmation.)

Kate’s shoes and clutch bag will be familiar to our regular readers.  The Duchess wears both pieces regularly.   Kate’s blue suede heels are by Alexander McQueen.  She’s owned them since at least 2011 (as she took them on the Canada/North America tour).

Kate’s bag is the “Muse” or “Raz” by Stuart Weitzman (known as both names in the USA & UK).

Kate carried a pair of mystery navy blue gloves today.   The eagle-eyed tweeter behind Kate’s Closet spotted that they’re the same mystery pair Kate wore to the Place2BE Forum in 2013. The photo below is from that engagement and I have altered the brightness so you can better see the glove detail (so excuse the bright blue colours)

UPDATE:  The gloves were designed by Andy Shiels in collaboration with Dents Glovers and The Worshipful Company of Glovers in London. They’re completely bespoke, made especially for Kate.

As you may have noticed, Kate wore her hair pulled up in a chic chignon today.  She wore a coordinating navy blue hat upon her head too.

We do not yet have confirmation on the designer/milliner, but it could be by Jane Taylor – perhaps a bespoke version of ‘Mica’ hat, pictured below:

Finally, Kate wore a new (to us, publicly at least) stunning, sparkling set of jewellery.  The necklace appears to be from G. Collins & Sons.  Susan from WhatKateWore.com found an almost identical pair on G. Collins & Sons’ Instagram account.

The stone is a Pear Shape Tanzanite surrounded by diamonds and set in platinum.  The necklace costs £8,400 GBP (approximately $12,416 USD). 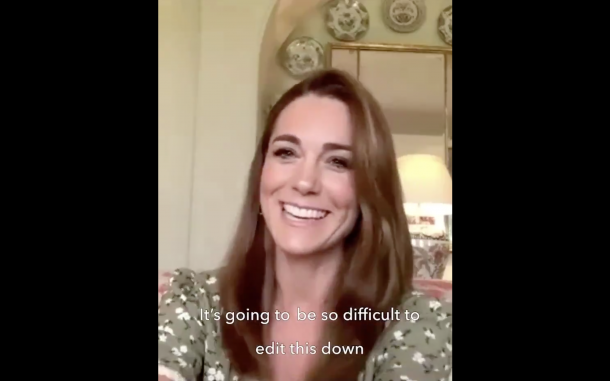 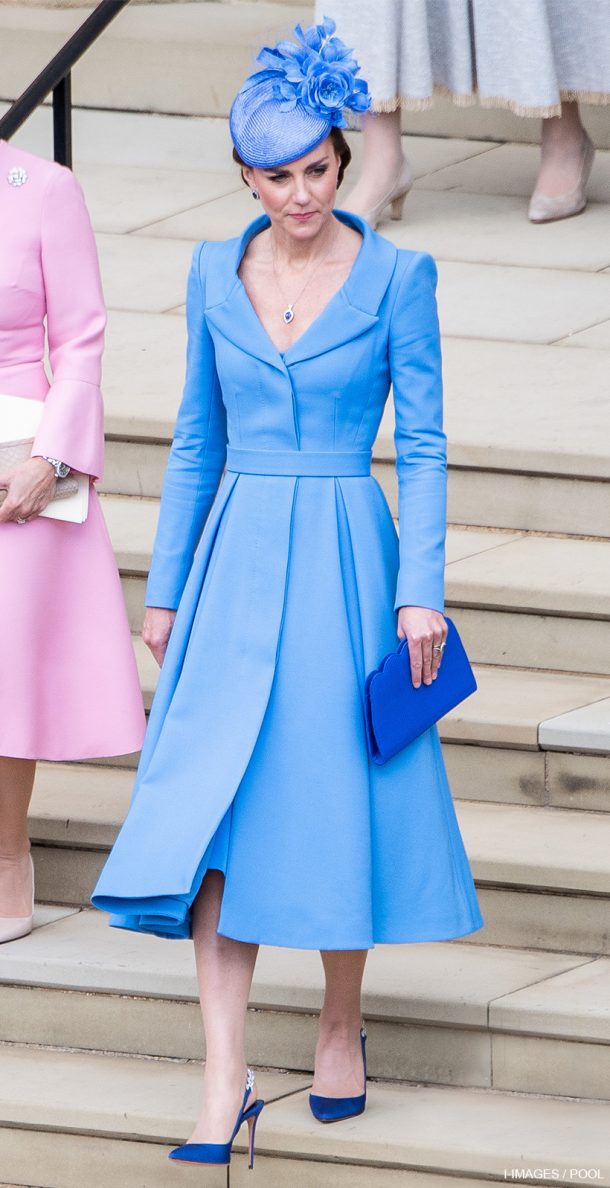