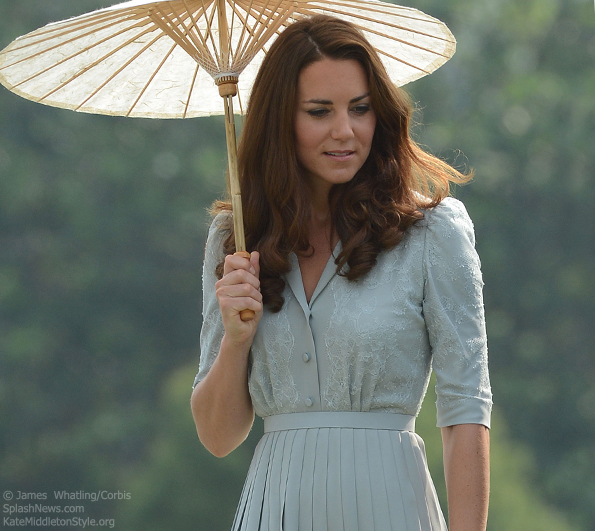 The royal couple’s final day in Singapore ended on quite a solemn note with a visit to the Kranji Commonwealth War Crematory where a wreath was laid by William and Kate on behalf of The Queen and Prince Philip.

The couple wandered around the rows of white graves, appearing deep in thought, after meeting veterans from Singapore, Britain, Australia and New Zealand.

To stave off the hot sun, Kate carried a traditional East Asian parasol, here we show a picture:

Kate with a parasol, touring graves with William at Kranji Commonwealth War Crematory. The couple take a moment to reflect on the sacrifices made during the Second World War. Image courtesy of Rebecca English from the Daily Mail.

William and Kate both signed the visitor’s book at Kranji too. Here we share another picture from Rebecca English, @RE_DailyMail.  You can see William and Kate’s named signed clearly:

Later, William and Kate flew to Kuala Lumpur in nearby Malaysia to embark upon their four day visit to the country, on the second leg of the South East Asia Jubilee tour.

Their first engagement was a lunch hosted by the country’s Prime Minister at his official residence. As you can see below, Kate’s Duck Egg blue dress matched the room’s decor beautifully!  (As an aside, this leads me to wonder if Kate researches things like this, such as colour schemes in advance, or whether it’s just a happy coincidence…?)

Kate was overheard admiring a large exotic fruit display and asking about pieces that we don’t tend to see very often in the UK. According to The Daily Mirror, Kate said, “wow” and remarked “I love unusual fruit.”

The couple then headed over to their engagement at Hospis Malaysia for the afternoon.

At the hospice, Kate and William met both patients at staff, before Kate gave her first overseas speech. This is Kate’s second official public address as a member of the Royal Family. Kate started off by talking about her visit to the country, declaring that herself and William are “hugely excited” to be there. She went on to discuss her links with East Anglia Children’s Hospice in the UK and mentioned how “thrilled” she was to hear that Hospis Malaysia is to collaborate with the charity she supports. Hospis Malaysia is one of only a handful of medical institutions in the commonwealth country providing support for dying patients. While at the hospice, Kate signed a birthday card for one of the patients and unveiled a plaque with Prince William.

Kate wore her signature L.K. Bennett Sledge platform shoes in taupe. Later in the day she also was spotted with the “Natalie” clutch from the same. 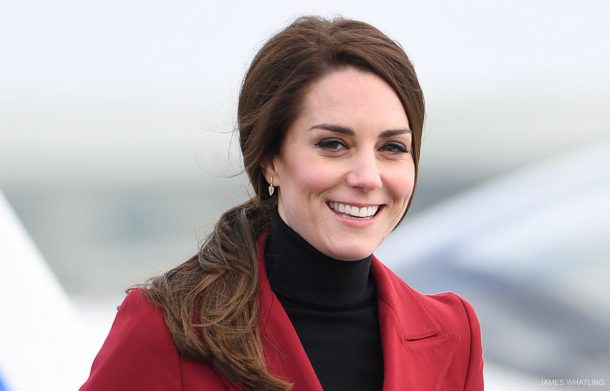