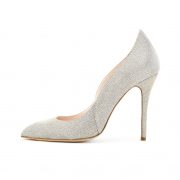 On the 23rd of November 2017, William and Kate attended the Royal Variety Performance at the Palladium Theatre in London.  The couple enjoyed performances from a range of acts, including the Killers, Paloma Faith, Louis Tomlinson and the Script.   Comedian Miranda Hart hosted the evening.

The Royal Variety Performance is an annual event that benefits the Royal Variety Charity, which supports those who’ve served in the entertainment industry and need assistance as a result of old age, ill-health, or hard times.  The Queen is Patron of the Fund.

The Royal Variety Performance dates back to 1912:

The origins of the Royal Variety Performance date back to 1912, when His Majesty King George V and Her Majesty Queen Mary agreed to attend a ‘Royal Command Performance’ at the Palace Theatre in London’s Cambridge Circus in aid of the VABF – Variety Artistes’ Benevolent Fund (the previous name of the Royal Variety Charity) and its proposed plans to build an extension to its Care Home for elderly entertainers, Brinsworth House. This first staging was a lavish occasion with over 3 million roses draped around the auditorium.

All the great names of British variety and music hall gathered at the Palace Theatre before King George V, Queen Mary and the Prince of Wales.  – royalvarietycharity.org

This is the second time William and Kate have attended the performance representing The Queen.   They first attended together in November 2014.

For the evening performance,  Kate opted for black tie glamour in a floor-length gown by British designer Jenny Packham.

The ice blue dress has long sleeves and a sweetheart neckline. It is embellished with sequins and flowers.

The dress is very similar to two of Jenny Packham’s dresses.  A piece from the designer’s autumn/winter2017 runway collection  (first image) and a bridal piece (second image): 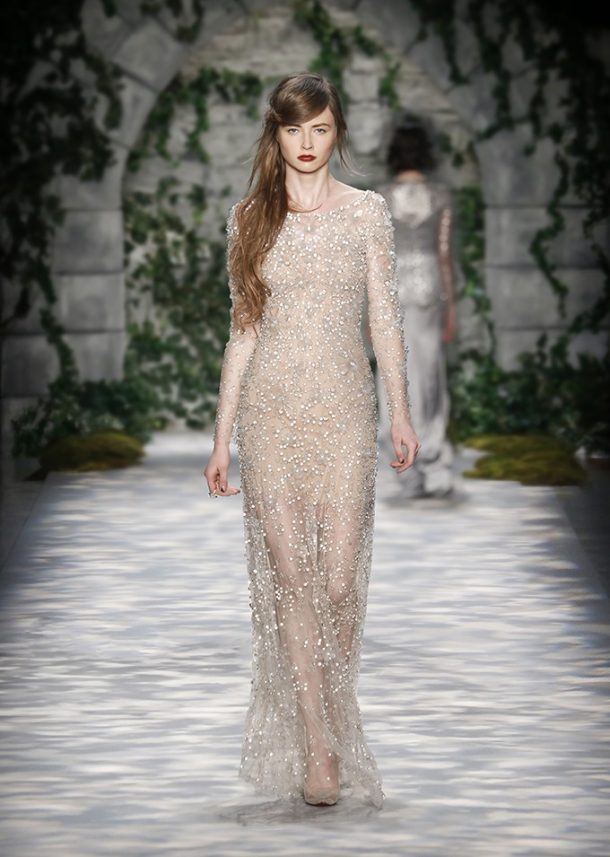 Here’s a comparison of the embellishments on Kate’s dress and the aw17 runway piece: 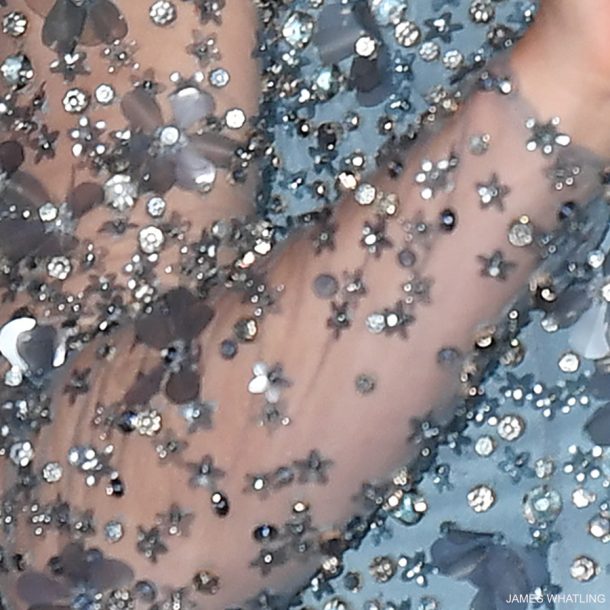 Kate’s clutch bag is also by Jenny Packham. It’s the designer’s Casa Crystal Clutch.  Kate’s carried on several occasions before, plus she owns it in red. 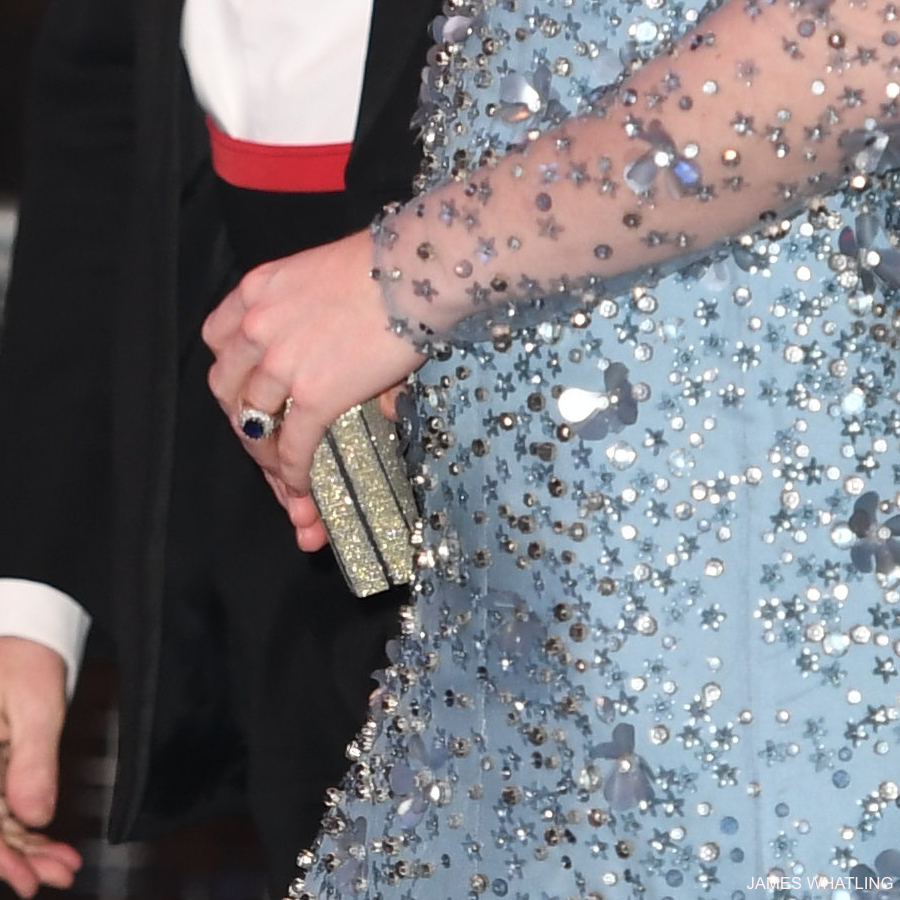 If Kate’s shoes feel familiar, it’s because she first debuted them earlier this year.  They’re the Cabrina style by Oscar de la Renta.  They’re made from a glistening platinum lamé fabric.  They have 100mm heel, a pointed toe, scalloped sides and a raised back. Kate finished the look with a pair of the Queen’s diamond earrings.  They’re widely referred to as the “Chandelier” style. 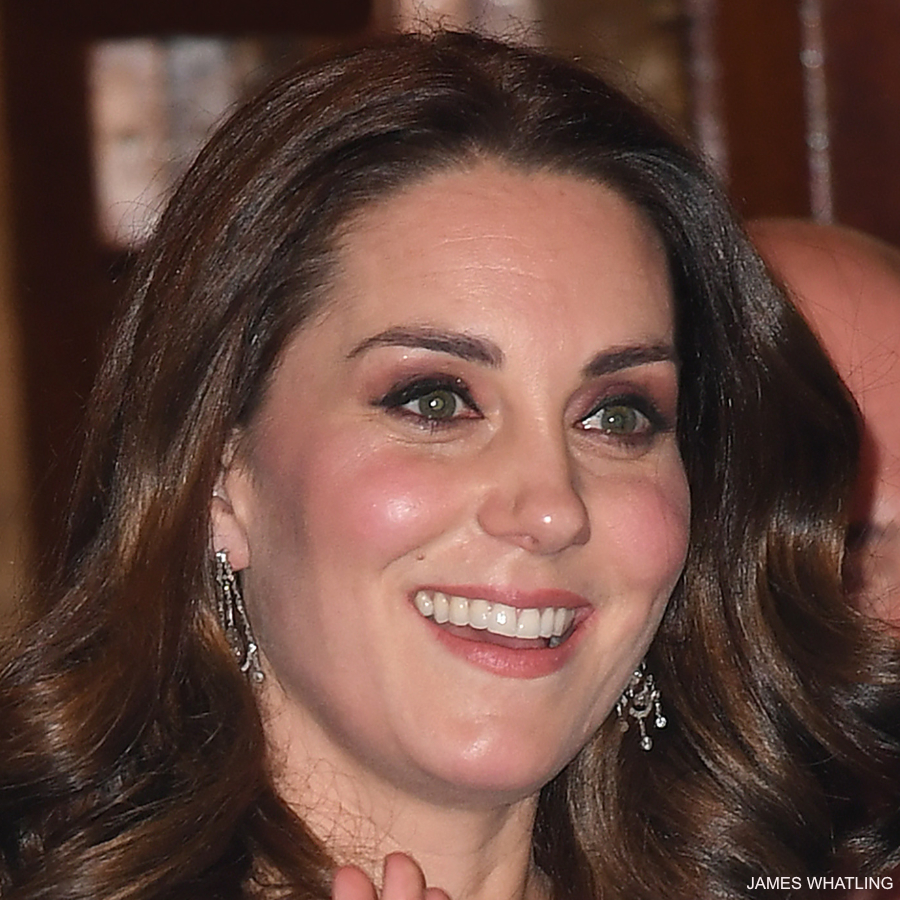