The Royal Tour kicked off in Mumbai, India today.  William and Kate landed in the city at around 10:30am local time.  Their commercial flight was early, putting them around 20 – 30 minutes ahead of schedule.   They arrived at the Taj Palace Hotel at midday (local time). 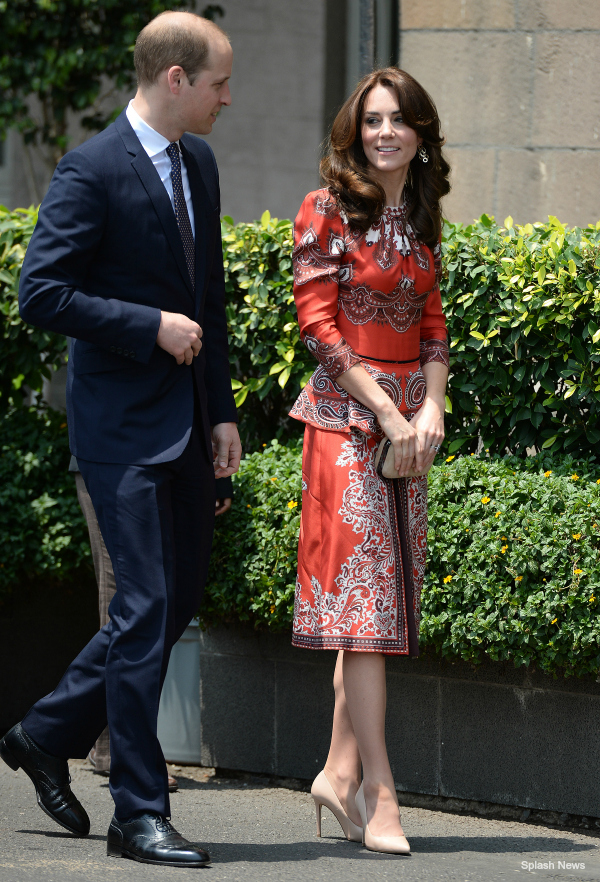 Both William and Kate will stay at the Taj Palace Hotel during their visit to Mumbai.  The hotel has hosted a number of VIPs including Barack and Michelle Obama.

Normally, high-profile guests stay in the Taj Palace’s £9,500-a-night “Tata suite”, but William and Kate have opted to stay in one of the hotel’s regular rooms instead, which costs around £700 per night.  The decision is likely for PR reasons due to the Tata Steel issue here in the UK.  Here’s how the Daily Mail explains the situation:

Their mysterious decision to avoid the £9,500-a-night, 15-room suite has prompted speculation that the Royal couple were put off by its unfortunate name – the Tata suite. After a year of awkward PR disasters, they could hardly afford to have their names linked so closely to a family which is preparing to sell off its entire UK steel operation at the potential cost of thousands of British jobs.

[…] although several representatives from the Tata group will be at the gala dinner, the Royal couple will not be meeting anyone from Tata Steel. Upon their arrival, Mr Taljinder Singh,the hotel’s manager, welcomed the Royal Couple with a bunch of flowers. They were also presented with garlands as they entered the hotel. Islamic militants bombed the Taj Hotel in 2008, causing around 30 deaths.  The attack was part of a coordinated terrorist plot around the city that took place at eight different locations and lasted three days.

Shortly after their arrival at the hotel, William and Kate laid a wreath at a memorial on-site. They also met with members of staff who were present during the bombings.  They heard stories of their experiences and learnt how they protected guests. At the memorial they were introduced to hotel chef Raghu Deora, 41, who was shot in the stomach and in the leg as he helped guests to safety.

The Duke asked him about what happened on the day while the Duchess said: ‘It must have been a surreal time.’

Mr Deora said: ‘The Duke asked me what happened to me and I explained how I was shot. He asked me how long I took to recover, and I said six months, with the last operation two years ago.’

The Duchess asked him about his cooking, and if he had a speciality, to which he replied that he specialised in local dishes.

Excerpted from The Daily Mail

Mr Deora cooked a private lunch for William and Kate this afternoon.  He cooked the royal couple a selection of vegetable kebabs, lentil curry and rice, ricotta cheese and okra.  Yum!

There’s a really insightful article in on the Mirror’s website all about the Taj Palace hotel that gives a fuller picture of the terrorist attacks. It’s really worth a read to put today’s visit in perspective.

For her maiden visit to the country and for the first engagement, Kate wore a red printed peplum dress from Alexander McQueen.  It’s a bespoke piece, clearly based on this dress from McQueen’s Pre-Fall 2016 collection: “Regal. That’s the first word that comes to mind when I look at these images of Alexander McQueen’s Pre-Fall 2016 offering. It has about it the distinct whiff of a royal household. Maybe it’s those opera gloves? The queen-like prints? The marabou feathers? It’s opulent.” The £165 clutch bag is made from a taupe coloured suede and features a gunmetal frame and clasp closure.

Kate donned a new pair of shoes for the visit too.  L.K. Bennett confirmed the Duchess wore their “Fern” heels in “trench leather”.

We are delighted and honoured that HRH The Duchess of Cambridge has chosen 'Fern' in trench leather for the first day of the Royal Tour in Mumbai. Link in bio to register interest or shop the lower heel 'Floret' available now online #lkbennett #lkbvip #duchessofcambridge

The shoes are not yet available for purchase on the brand’s website, but you can register your interest by clicking here. Thank you to the following ladies on Twitter for quickly finding and sharing the items Kate wore today:  @CallMeKateBlog, @AnnieElizabethN and @IrishSara1980.