Tuesday, 12th May 2020—The Royal Family joined forces to pay tribute to nurses in the UK and Commonwealth. Kensington Palace released a video montage of Royal Family members—including Kate—chatting with nurses and giving messages of support.

The video opens with an audio clip of the Queen taken from a phone call with Professor Kathleen McCourt, the President of the Commonwealth Nurses and Midwives Federation and Fellow of the Royal College of Nursing.  The Queen can be heard describing International Nurses Day as a “rather important day… because [nurses] have obviously had a very important part to play recently”.

The Queen is, of course, referencing the Coronavirus pandemic that is currently sweeping the world.

Together, Kate and Sophie (the Countess of Wessex) hold video conferencing calls with hospitals in seven different countries.  The two women spoke to nurses in Australia, Sierra Leone, Cyprus, India, Malawi, the Bahamas and the UK.

Prince Charles offered a message of support, saying that along with his family, he wanted to “join the chorus of thank yous to nursing and midwifery staff all over the country and indeed the world”.

International Nurses Day is celebrated on the 12th of May each year, the anniversary of Florence Nightingale’s birth.

The calls were set up by Nursing Now, a global campaign to improve health by raising the status and profile of nursing.  Kate is Patron of Nursing Now.

Today, Nursing Now released a letter sent by Kate back in April.

I wanted to thank the Nursing Now campaign very much for all you are doing to support nurses around the world during this hugely difficult time.

The crucial, and often unsung, role that nurses play in global health care is needed now more than ever. In this, the International Year of the Nurse and Midwife, healthcare workers are facing unprecedented challenges in the fight against the global pandemic. Often putting their lives at risk and separating from loved ones to protect them from harm, they are an inspiration to us all. We stand behind all nurses and commend their bravery.

I know you had so many plans for the Nursing Now campaign this year which have sadly had to be postponed. This international crisis has brought into sharp focus how much the global community relies on nurses and all healthcare professionals and it is clear that we will need to continue to champion the nursing profession long after the pandemic has ended.

I am here to support you in the future.

Thank you for your continued work and I send you my very best wishes for the challenging times ahead.

We can see Kate is wearing her Altuzarra Aimee dress. The long-sleeved, buttoned-through dress features a slit at the thigh, bib detailing on the chest and gathered sleeves.

The striking blue dress features a playful black and white polka dot print. Once again, Kate has given clear thought to her wardrobe choice, opting for blue to honour the NHS logo and the colour of nurses’ uniforms here in the UK.

Originally listed at matchesfashion.com retailing at £1728.35, the Aimee dress sold out long ago. Unfortunately, is no longer available for purchase. It was from Altuzarra’s Pre-Fall 2016 collection. The stylish dress also came in a couple of other colourful styles. We show it below in black/white at Neiman Marcus and Red at Nordstrom.

Kate first wore the dress in 2016 during a visit to Stewards Academy with Place2Be and Heads Together.

It looks like Kate wore the Ocean Tides Milky Quartz earrings by Patrick Mavros for the video calls. She’s worn the earrings on a number of occasions recently.

The £800 earrings feature polished milky quartz set in Sterling silver hanging from a sea-urchin inspired post. The sea urchin is decorated with 18ct yellow gold and a 2mm brilliant diamond.  The earrings are handmade in Mauritius.

From the designer:  “We have taken inspiration from the alluring and tranquil colours of the Indian Ocean to create these cabochon earrings … The appearance and cloudy nature of this beautiful quartz is caused by tiny water bubbles inside the quartz.” 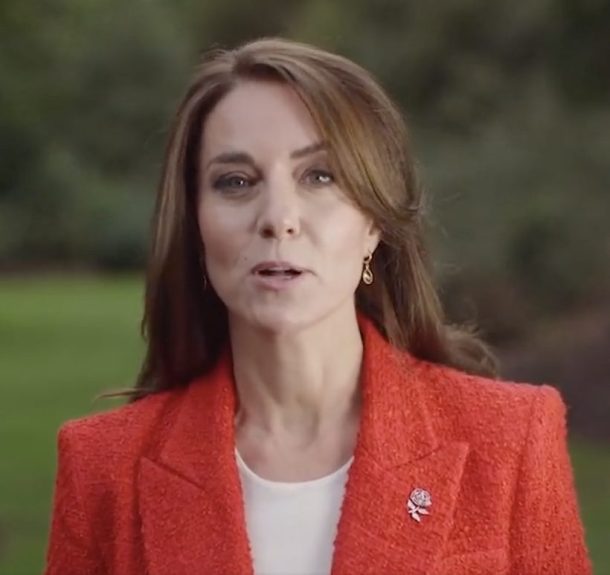