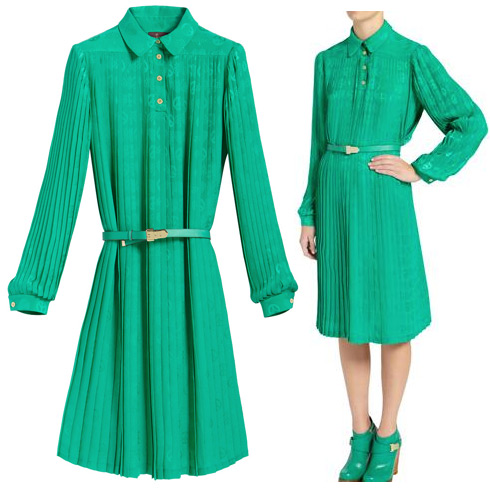 On the 28th of November 2011, The Queen hosted a reception for 350 members of the media at Buckingham Palace.  A number of famous faces attended, including Fearne Cotton and Philip Schofield.  William and Kate attended the event too.

The reception was held in advance of the Queen’s Diamond Jubilee celebrations.  It was the first event of its kind for ten years (the previous being for the Golden Jubilee in 2002).

Very few photographs from the evening exist, due to a media blackout in the palace. We do know that Kate wore a green pleated dress from British label, Mulberry.  The cabbage coloured “Peace and Love” shirt dress featured a jacquard motif print on the fabric.

The dress had long sleeves and was pleated all over. It had a Peter Pan-style collar and came with a coordinating gold belt.  It originally retailed for £1,400 ($2,216).  It is long sold out, as it’s from Mulberry’s 2011 collection.

During the reception, Kate confessed to Grazia’s editor-in-chief that she had only just realised Mulberry made clothes as well as accessories.