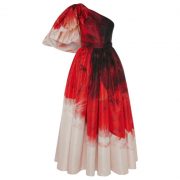 It’s a big birthday for Kate today (9th Jan 2022).  The Duchess is celebrating her 40th.  The big four-oh!  To mark this momentous milestone, she commissioned three formal photography portraits.

The first image shows Kate in the side profile, sitting down and looking straight ahead, her curly hair placed behind her shoulders. She’s touching a ribbon that trails from the bow on the shoulder of her gown. Her hand rests on the frock’s organza skirt, which shows off her engagement ring clearly. The look is finished with a pair of pearl drop earrings. (More on the specifics of her outfits below)

Art History graduate Kate also looked to Victorian photography for inspiration. The Telegraph noted she is reminiscent of “the Young Queen Victoria” in the above portrait.

The second photo is more modern. Kate looks into the lens of the camera with a beaming smile. Her curled is still behind her shoulders but has movement. She’s wearing a bold, red asymmetric gown with one exaggerated puffed shoulder. You can imagine this portrait on the cover of a Sunday fashion supplement.

The third image is also sepia-toned. It too shows Kate smiling at the camera. Her hair is loosely curled and she’s wearing a ruffled white gown, which gives the image a sweet, youthful quality. The colouring and slight blurring create a dream-like effect

The stunning photos were taken in November 2021 by Italian fashion photographer Paolo Roversi.

In an interview with an Italian newspaper, Roversi reveals that he first met Kate at Kensington Palace in November 2021. They were served “typical five-o’clock tea, with biscuits.”  (Please note, all information and quotes were translated using Google.)

Kate had done her homework. She came armed with inspiration. She told Roversi she was inspired by 19th-century photographers, including Julia Margaret Cameron, and showed him artworks by Pre-Ralphaelite painters.

After the “nice meeting”, Roversi met Kate later in the month to snap the photos. The shoot took place at London’s Kew Gardens.

Roversi notes that Kate is used to cameras but not to posing. He said she was “a bit fearful in facing a real session”.  He reassured her that once she got started, it would be very easy.  “And so it was”.

All in natural light. Her with little make-up, no hairstyle, simple pearl earrings, a ring… The focal point of Kate’s face is her gaze and smile. I didn’t want her too lady duchess, too establishment, but purer and more contemporary as possible, even more timeless.

Kate’s confidence grew throughout the session, which took four hours to shoot. Roversi even convinced her to dance at one point:

For the official portrait she wore the organza [dress], almost like a classical ballerina. In the end I wanted to take pictures in motion, so with that wonderful wide skirt I made her dance in front of my camera, a kind of accelerated waltz mixed with a pinch of rock’n’roll. And it is a secret image for now.

“For now”. I do hope the dancing portrait will be released to the public one day. On Twitter, I polled my followers to ask if they think if we’d ever see it. At 200 votes, 51.5% of respondents said that it’ll never see the light of day.  48.5% voted for the opposite.  Personally, I think it will remain private.

Roversi shot 250 photos of Kate in total, almost all in black and white, which he quickly culled to 70. Then began the job of choosing the final three.

I did the first skimming, a dozen of her favourites, then we got to 3 of my favourites and one of hers, the official photo is both mine, but also her favourite. But Kate was less determined than me in the last choice.

Note: in the article Roversi says Kate considers the side profile “official”, “even if it is not from the protocol point of view”.

Apparently, she let William and her children help with the final selection—I believe they chose the third image.

And working with Kate? What is she like as a model, as a client?

She is a nice, welcoming woman who puts you at ease, respectful of everyone’s work. Bursts of joie de vivre. Open, generous, luminous, I think it can bring so much hope to England and to the whole world.

The three different portraits will enter the permanent Collection of the National Portrait Gallery, of which Kate is Patron.  Over the course of 2022, the three portraits will be displayed in three different places that have special meaning to Kate:  Berkshire, where she grew up, St. Andrews, where she attended university and met Prince William and Anglesey, where the two first set up home together and lived following the Royal Wedding in 2011.

This touring exhibition is part of the National Portrait Gallery’s Coming Home project, a nationwide initiative that sees portraits of well-known individuals being sent to locations with which they are closely associated. The project has enabled works from the National Portrait Gallery’s national collection to travel to towns and cities across the UK, providing communities with the opportunity to see famous works locally.  The gallery will announce further details of the locations and dates in due course.

This exciting project sees the Gallery sending portraits of iconic individuals to places they are closely associated with. The country-wide initiative will enable portraits from the national Collection to travel to towns and cities across the UK, providing venues and communities with the opportunity to celebrate their local heroes.

Let’s take a closer look at the items Kate’s wearing in the photographs.

In the portraits, the Duchess is wearing three stunning gowns by Alexander McQueen.  In the interview cited above, Roversi remarks that Sarah Burton (McQueen’s Creative Director) selected the gowns for Kate:

The designer Sarah Burton chose the dresses: only one was red, the others neutral.

In the ‘official’ portrait (side profile), it looks like Kate is wearing a custom version of this dress from Alexander Mcqueen’s Spring 2022 runway show (look 31).  (Credit:  Laura on Twitter).

Both dresses feature the bow detailing at the shoulders and at the waist.   Kate’s version has the corset and embellishments removed.  (Aside, I love the colour!)  A closer look at the gowns together:

In the second portrait, Kate’s wearing a gown with an asymmetric top and an exaggerated draped puff sleeve. It’s look three from the label’s Fall 2021 collection. With thanks to Innominate on Twitter for the ID.

The Fall 2021 campaign was titled ‘Anemones’ and the flowers inspired Sarah Burton’s designs. You can currently purchase the dress with the bold red anemone print for $4,990 on the designer’s website. As you’ve probably noticed, Kate isn’t wearing the floral print. Sarah Burton must have had the dress created in plain red fabric for the shoot.

Kate’s third and final gown looks like look 22 from McQueen’s Resort 2022 collection (as noted by UFO NO MORE.) The collection was inspired by 18th century English poet, painter and printmaker William Blake.

The Telegraph reports one of the gowns incorporates “silk jacquard, lace, organza and tulle repurposed from previous collections in an effort to improve sustainability.”

The Duchess is pretty loyal to Alexander McQueen and wears outfits by the design house regularly.

Let’s take a look at the two pairs of earrings chosen by the Duchess for the shoot.

Kate wore a pair of the Queen’s diamond earrings with her red gown.  The Court Jeweller describes them as “a cluster stud with a floral motif, from which a pendant of four graduating diamonds is suspended. The pendant is surrounded by a diamond frame.”

Kate first wore the sparkling earrings to the Place2Be School Wellbeing Awards in 2016.  The Court Jeweller notes the provenance of the earrings is unknown.

The second pair of earrings, worn in the sepia portraits, belonged to Princess Diana. They are the Collingwood Pearl and Diamond Earrings. The earrings were a wedding gift to Diana from Collingwood jewellers in London.

Kate first debuted the earrings at the Spanish State Banquet in 2017.  She has worn them on a number of occasions since.

If you zoom in on the portrait where Kate is in profile, you’ll notice she is also wearing Princess Diana’s three-strand pearl bracelet (and her sapphire engagement ring, of course.)

The bracelet was designed by Nigel Milne.  Here’s the piece in his 1988/1989 jewellery catalogue:

As Nigel Milne describes on his website, the original bracelet benefitted the charity Birthright.  Diana was the charity’s Patron. Kate started wearing the piece in 2017, to a reception at the Clärchens Ballhaus in Berlin, during the couple’s tour of Germany.