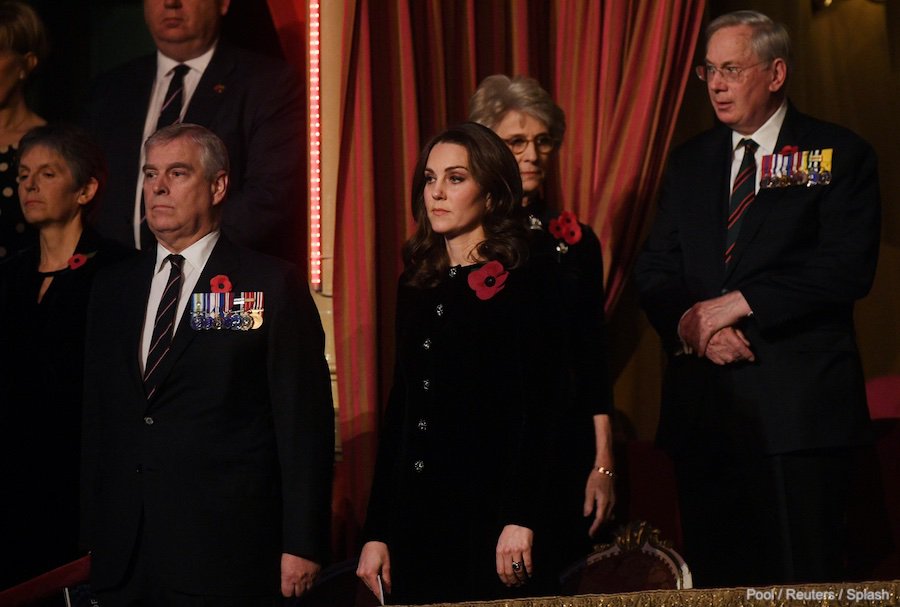 On the 11th November 2017, the Duchess of Cambridge (Kate Middleton) attended the Royal British Legion’s Festival of Remembrance at the Royal Albert Hall in London. 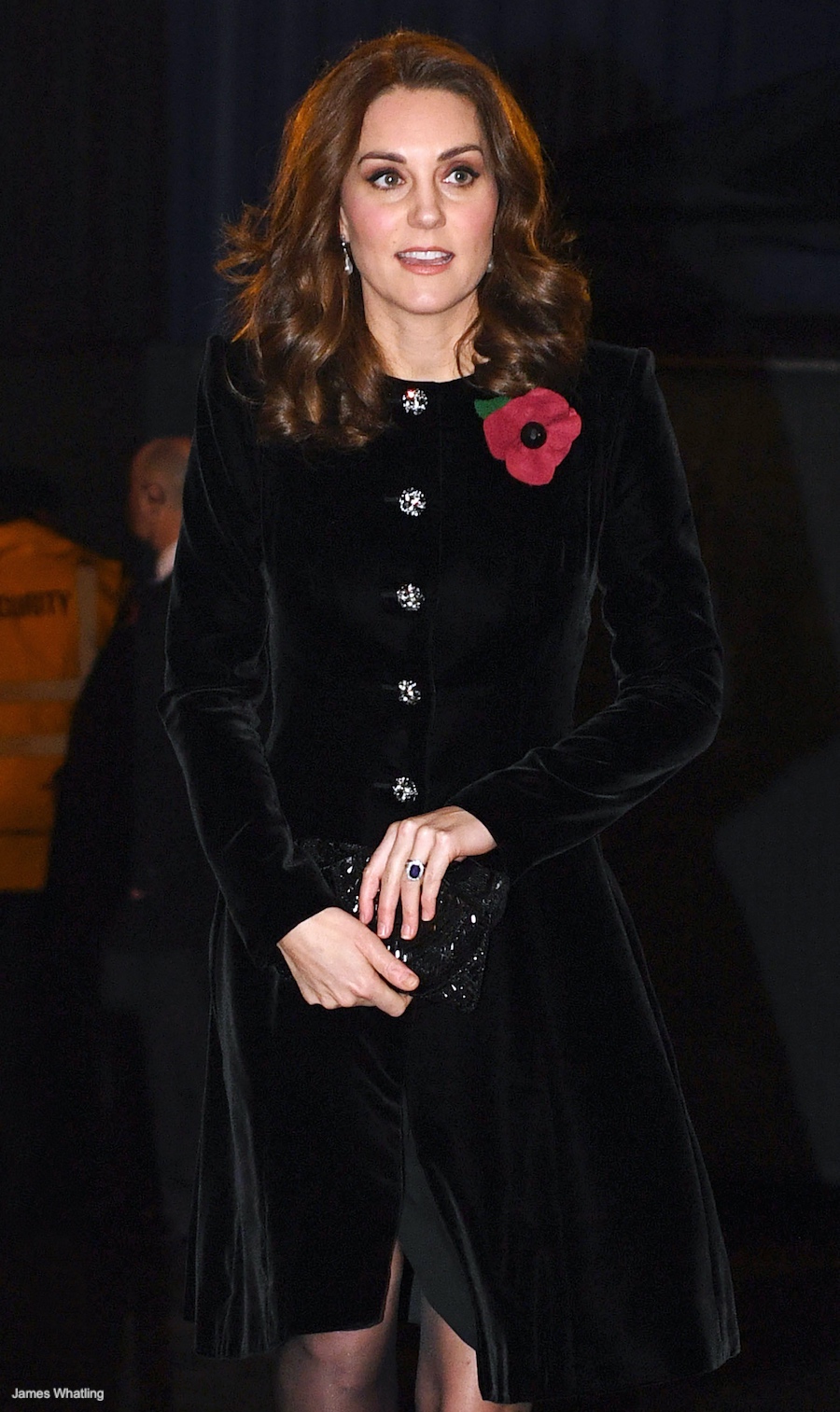 The Festival of Remembrance is an annual event that pays tribute to victims of war and conflict.  It’s been held at the Royal Albert Hall annually since 1923.

Veterans and service men and women engaged in current military operations join the audience at the Royal Albert Hall to give thanks and pay tribute to all who risk their lives in the service of their country.   – BBC.co.uk 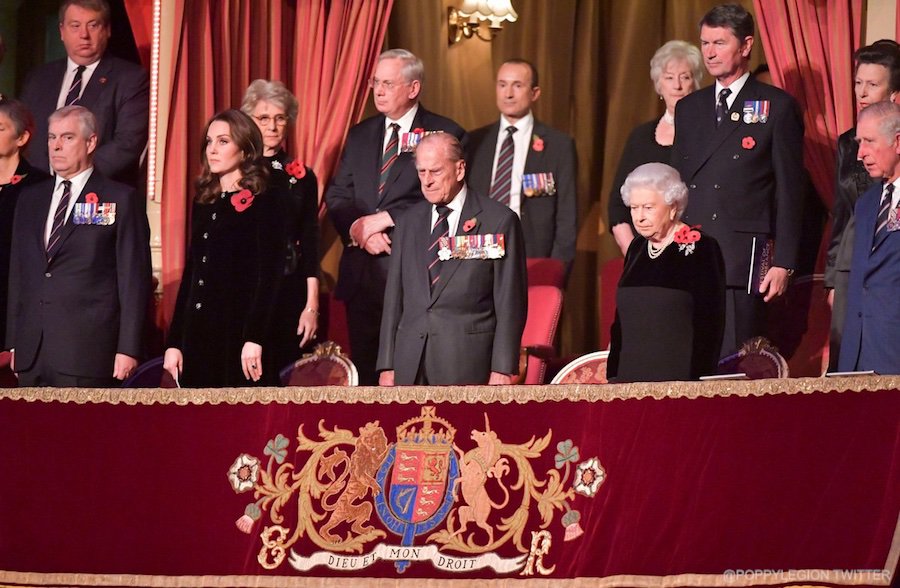 2017’s Festival, which actually fell on Armistice Day, marked the centenaries of women’s service in the regular Armed Forces, the Battle of Passchendaele, the creation of the Commonwealth War Graves Commission, and the 100th birthday of Forces’ sweetheart Dame Vera Lynn.  It also commemorated the 75th anniversary of the Battle of El Alamein and the creation of the RAF Regiment. 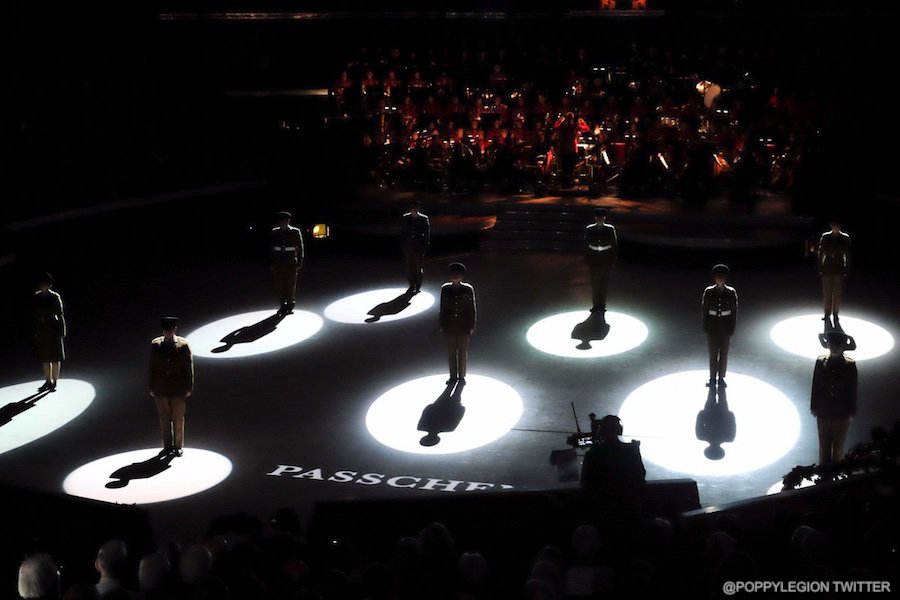 As in previous years, the Festival concluded with a visual striking finale.  As the audience observed a two-minute silence, thousands of poppies fell from the hall’s domed roof.  The poppies represented the lives lost during the two World Wars and subsequent conflicts. 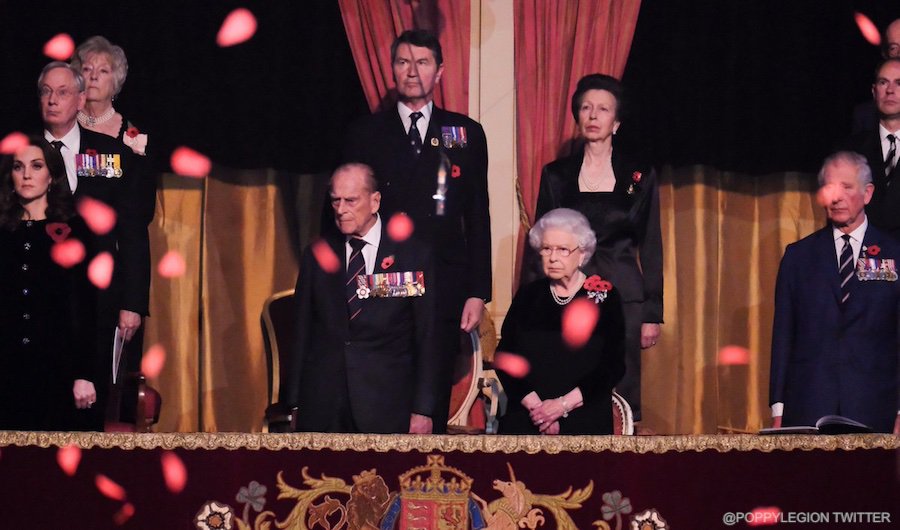 Although officially retired from public duties, Prince Philip accompanied the Queen to the Festival.  The Prince of Wales, the Duchess of Cornwall, the Duke of York, the Earl and Countess of Wessex and Princess Anne were also in attendance. 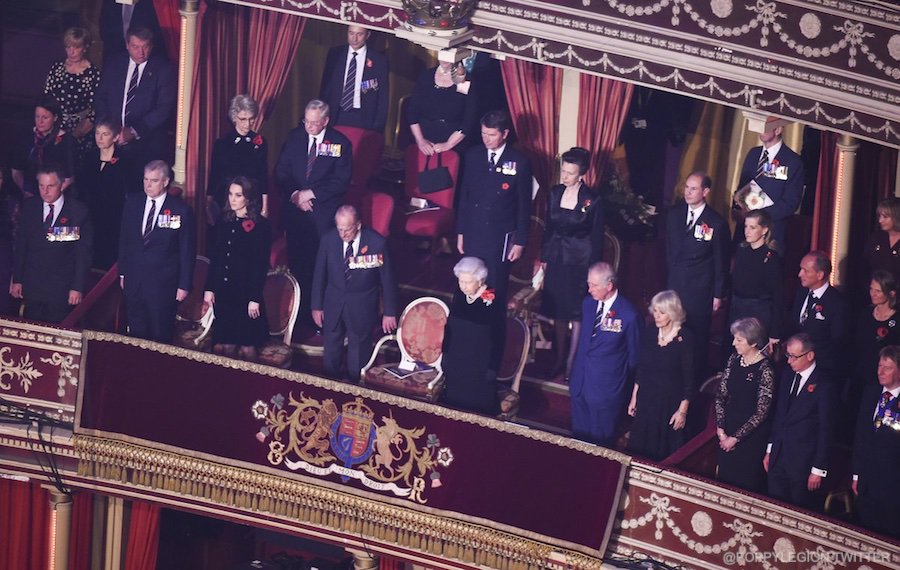 Prince William did not attend the event due to a schedule conflict.  He spent the evening at the Principality Stadium in Cardiff watching the Wales vs Australia rugby match.  William is Patron of the Welsh Rugby Union. Prime Minister Theresa May and Leader of the Opposition, Jeremy Corbyn also attended the Festival. 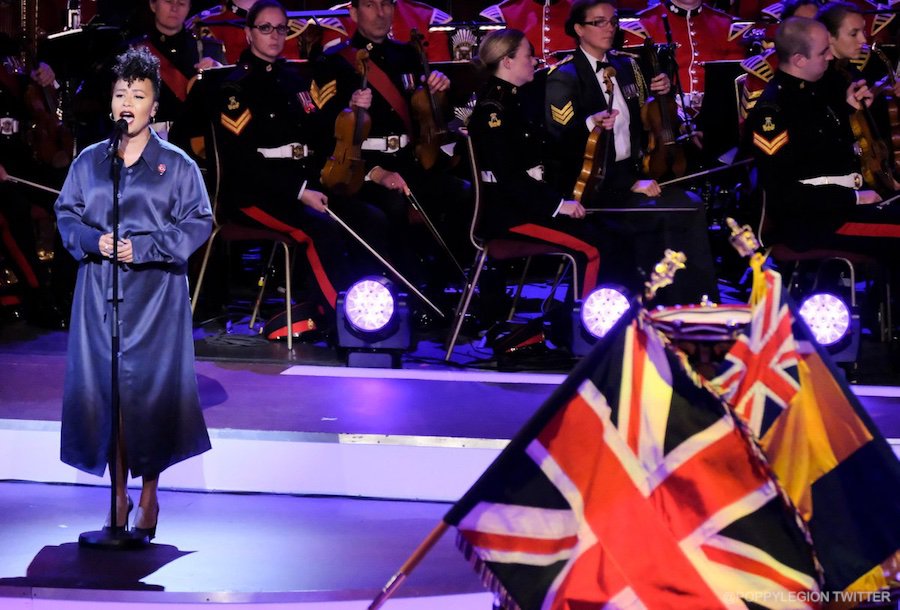 They were joined by The Queen’s Colour Squadron and The Band of HM Royal Marines. If you’re in the UK, you can watch the festival on the BBC iPlayer here. It looks like a longer version of the designer’s black silk velvet Caressa jacket. Here’s a close-up of the neckline, shoulders and buttons for comparison:

The buttons are made from jet, glass and silver Swarovski crystals.

Kate carried her black beaded clutch bag by Magid.  It’s a vintage piece that might date back to the 1950s. 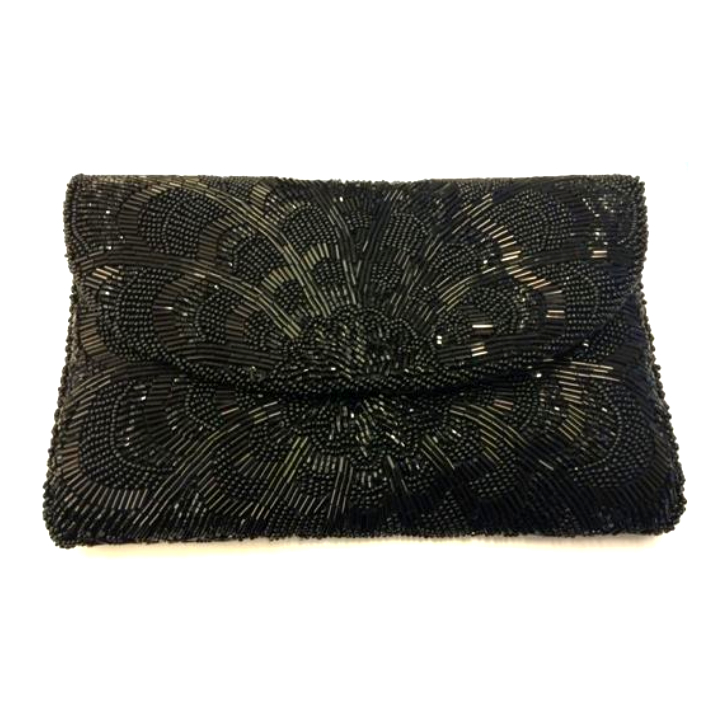 Magid is a wholesaler that manufactures a wide range of accessories for companies across the world, including Nordstrom.  Interestingly, the company’s website states that Anya Hindmarch stocks the Magid Evening line alongside her own designer evening bags.  As regular readers may be aware, Kate has carried a number of Anya Hindmarch bags in the past.

I’m unsure which pair of heels Kate wore to the Festival.  But they appear to be her Gianvito Rossi pumps in black suede. Kate wore a pair of pearl drop earrings from Princess Diana’s private collection, they’re often referred to as the Collingwood Pearl and Diamond Earrings. They were a wedding gift to Diana from Collingwood, the Spencer family jewellers. 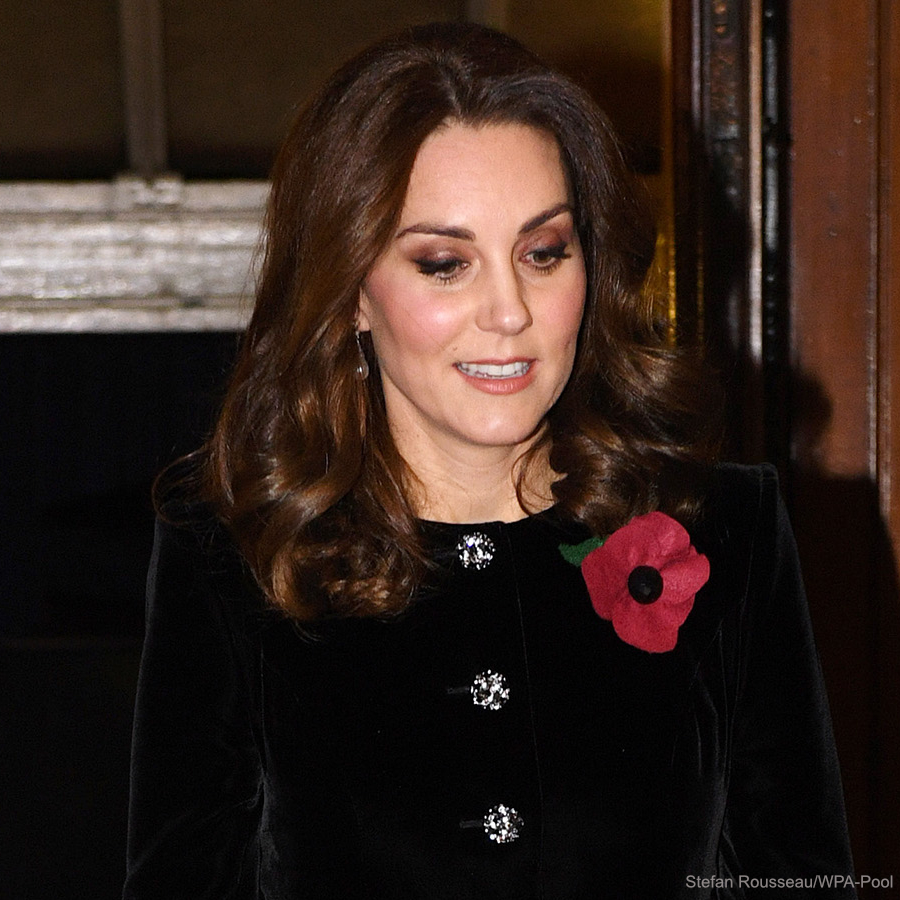