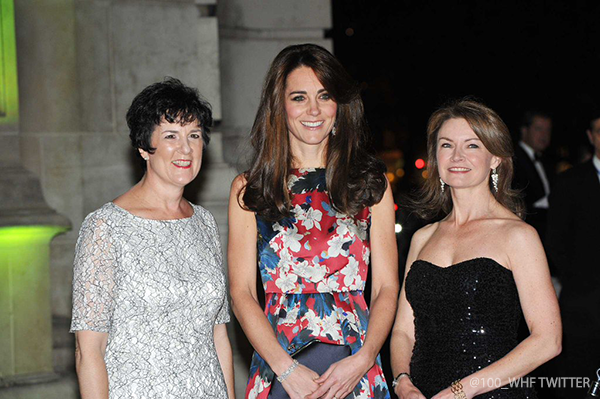 This year’s gala dinner took place at the V&A museum in Kensington and benefited The Art Room, a charity that uses art therapy to build the confidence of vulnerable children experiencing emotional and behavioural difficulties.  As you may recall, Kate became patron of The Art Room in 2012.   Since, Kate has visited the charity and attended engagements in benefit of the charity on a number of occasions.  A few reminders below:

Prince William became Patron of the 100WHF organisation in 2010.  Kate and Prince Harry joined William as Patron in January 2013.  This is Kate’s third gala to date.  A reminder of the two previous gala dinners –

Tweeting this morning, the 100 Women in Hedge Funds team announced they raised over £550,000 for The Art Room (that’s the gross total) as a result of the gala and auctions they ran during the evening.  Auction prizes included an “Art Room Party,” seven nights in a luxury Scott Dunn staffed chalet for eight people, an private dinner with Channel 4 News presenter Jon Snow and personal styling with fashion designer Stella McCartney in London.

The Duchess has written a letter thanking the 100 Women in Hedge Funds organisation for supporting The Art Room at this year’s gala dinner.  You can read the full letter here.

The Duchess wore a floral printed gown by one of her favoured designers, Erdem.

The dress is made from silk-gazar fabric and printed with Erdem’s “Ohana Tulip” design, said to be inspired from 1960s Japanese prints.  From Erdem’s website:

Inspired by early 20th century Japanese graphics, white orchids are strewn across a deep crimson base whilst vibrant blue irises burst through, creating a statement print ready for the summer months.

Here’s how Net-A-Porter.com describe the dress:

Flawlessly cut from lustrous silk-gazar, this elegant piece is fitted at the bodice and flares below the waist into a voluminous peplum skirt. Show off the low V-back with an updo.

Kate’s clutch bag may feel familiar with some of our regular readers, it’s the Anya Hindmarch “Maud” bag.  The Duchess has carried this bag for a number of years.   It’s still available from AnyaHindmarch.com where it retails for £475 (approximately $726 USD).

More about the bag –

Handmade in one of the oldest purse frame workshops in England, the Maud was one of the first bags Anya designed. A popular choice for weddings, it’s made from soft satin silk and can be personalised with an embroidered monogram and embossed handwritten message.

Kate’s Jimmy Choo “Cosmic” heels made a return this evening.   The black suede shoes are no longer available for purchase.  Jimmy Choo now sell a pair that look virtually the same called “Alex”.  Here’s a side-by-side for comparison –

Noticeably, the Duchess wore a new pair of sparkling earrings this evening.  They’re a pair of sapphire earrings surrounded by a diamond fringe, with small sapphires suspended below.

They originally belonged to The Queen Mother.  If you’d like to read more about the earrings, click here.

Kate’s diamond bracelet should be more familiar, the Duchess has worn it several times in public since the 2011 Canada and USA tour.   It’s commonly believed this bracelet was a gift from Prince Charles.  Pictured here at the SportsAid SportsBall in 2013- 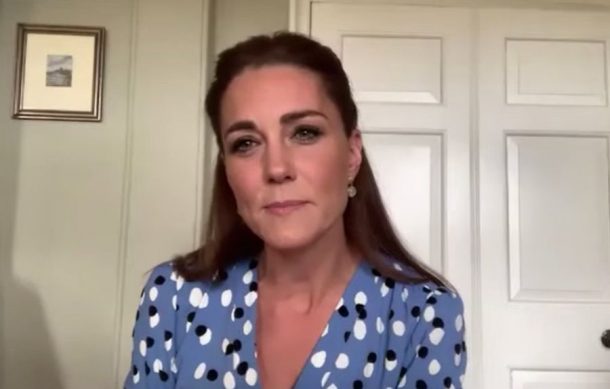 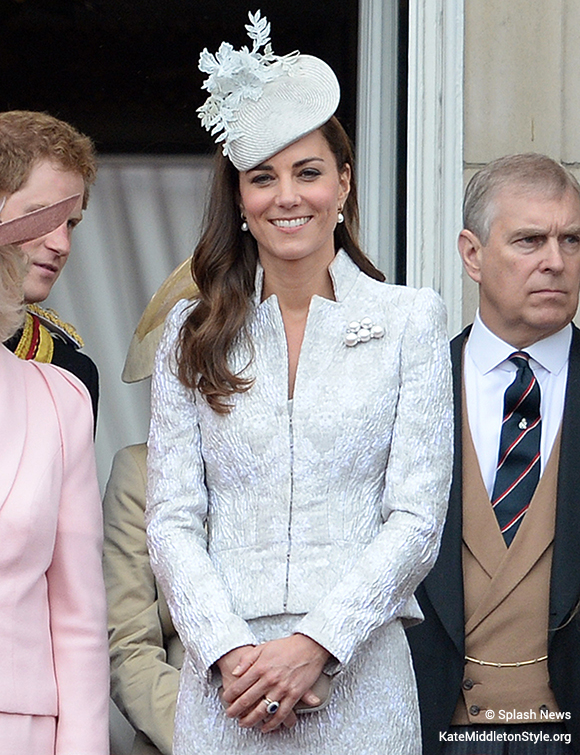