In the evening on day four of the royal tour, Kate and William left Kuala Lumpur by plane and arrived at Kota Kinabalu in Sabah a short while later.  Sabah is a Malaysian State on the island of Borneo.

The couple attended a reception hosted by the Sabah State Government. During the reception, Prince William and Kate wore traditional beaded jewellery, which they were given at the airport upon arrival.  With thanks to Instagram user Cathj88 (via HRH Duchess Kate Blog) and What Kate Wore Facebook user Brynnan, we can take a look at Kate and William during the relatively private gathering: 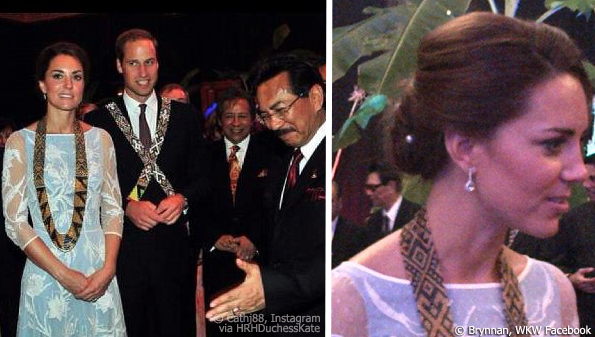 Brynnan (who snapped the picture on the right) explains that the necklaces are reminiscent of the lei (floral garlands) in Hawaii but without the flowers.  Facebook friend Marny further explained about the beaded necklaces, telling us they’re actually called “Pinakol” and they’re is synonymous with the Rungus culture.

The Rungus people are an ethnic group who live in Borneo, primarily in northern Sabah and the surrounding area Kudat.  Here we can see a picture of a Rungus girl in traditional dress and beaded jewellery, courtesy of Cjames Fotografia on Flickr: 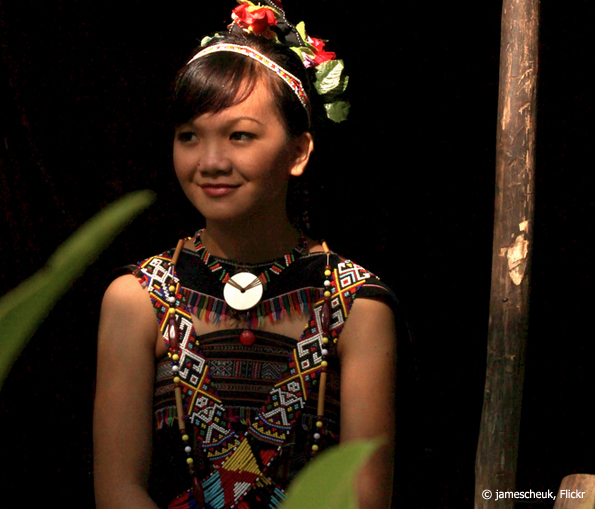 As this newspaper clipping from a newspaper shows, the royals were also presented with a book called “Spirit of Borneo”. The book looks very interesting, it showcases life in Borneo through the lens of Hollywood couple Martin and Osa Johnson during their two visits to North Borneo in 1920 and 1935 when the territory was a crown colony of Great Britain.

For the reception at Sabah, Kate wore the same blue dress as from the Malaysian Diamond Jubilee tea party earlier in the day: 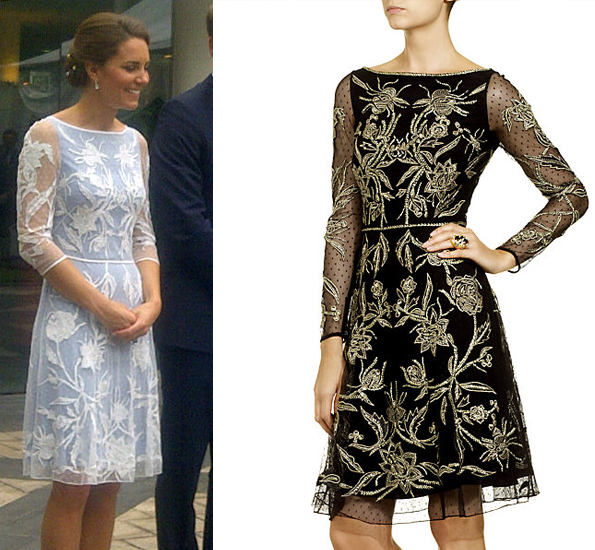 The dress is a modified version of the Temperley London Aster Flower Dress from the AW12 collection.  It’s available in black and gold from the Harrods website.

After the reception, the royals retired to their hotels for the evening.

Day Five:  Catherine and William sitting in a tree…

The following morning, William and Kate took a helicopter to Sabah’s Danum Valley to tour the rainforest, to learn about conservation and climb trees (I’m not joking!)  We can take a look at Kate and William in the helicopter and being hoisted up the tree with thanks to Su Lin who was at the scene: 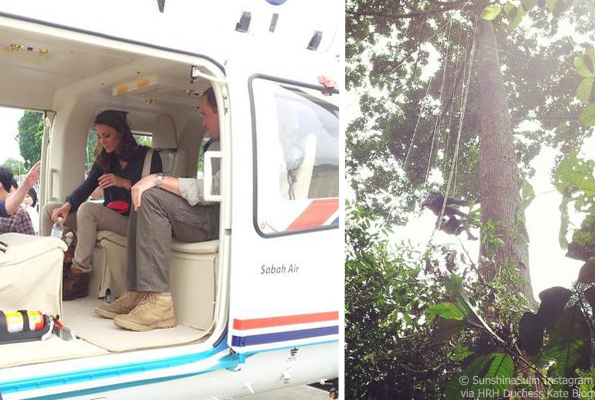 Here we can see Kate looking through a microscope as she attends a talk about the research conducted at Danum Valley Field Centre Lab: 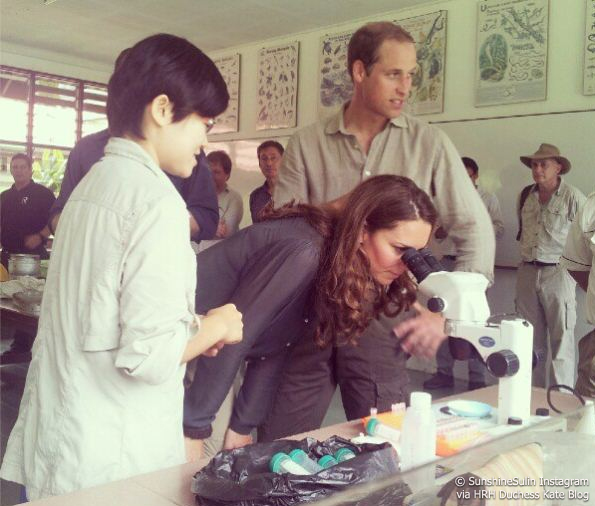 St. James’ Palace released a statement regarding the royal couple’s choice to visit the Sabah, saying the primary reason was “The Duke’s longstanding interest in conservation.” Prince William is a Fellow of the Royal Society who run a world-leading research station at Danum Valley.  The statement continues:

“The Duke and Duchess may have a chance to see wild orang-utans and other animals, although such encounters are far from guaranteed. Following the visit to the research station, Their Royal Highnesses will retire privately to a nearby lodge for a private lunch.”

Here is a final picture of the couple walking through the rainforest, courtesy of UK in Malaysia, via @WhatKateWore: 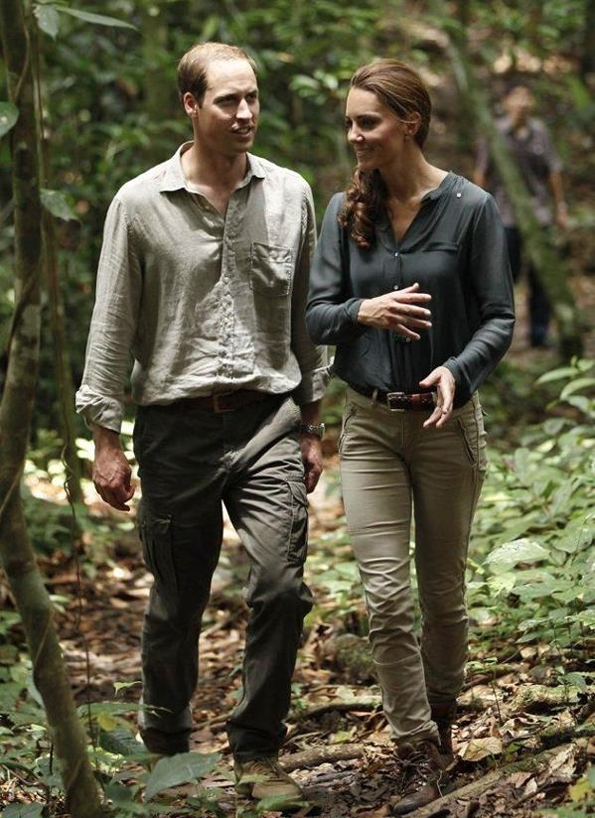 The visit to Danum Valley concludes the couple’s visit to Malaysia. Tomorrow they will move onto Honiara in the Solomon Islands. The press release states that The Duke and Duchess will represent The Queen for celebrations of the Diamond Jubilee, so the visit should be “enormous fun and celebratory in tone.” This will probably be a welcomed contrast for the couple after the recent events regarding French Media publishing topless photos of Kate sunbathing, the impending legal action and the worry that an Italian magazine are set to do the same. 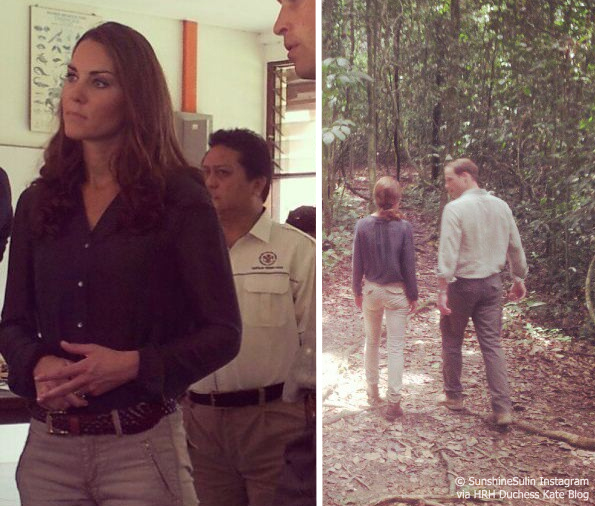 Kate kept her outfit appropriate for the visit, donning a pair of beige cargo trousers, a silky grey/blue shirt and a pair of walking boots.

Kate’s shirt is from Zara’s 2010 collection.  Here we share a picture from Le Cheap C’est Chic Blog from April 2010, via the wonderful What Kate Wore. 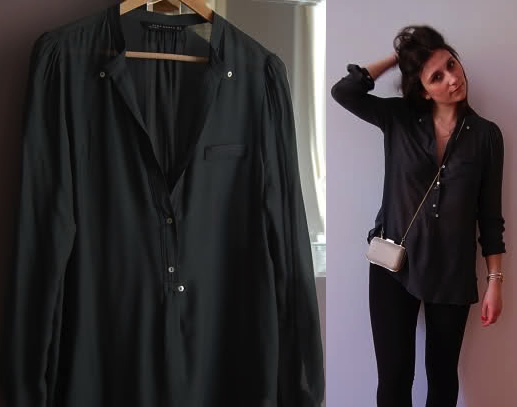 With thank to the HRH Duchess Kate blog for sharing the ID on this lovely blouse.

We also think Kate is wearing a plaited Mulberry belt, like this one:

The “Kate community” haven’t reached a consensus as to where the rest of Kate’s casual outfit is from, but if we work it out, I’ll update the blog accordingly.

When leaving for the airport and in the helicopter, eagle-eyed fans spotted The Duchess’ Longchamp Le Pliage bag.  Here we show the bag in different sizes, as always, click the images to view in more detail: