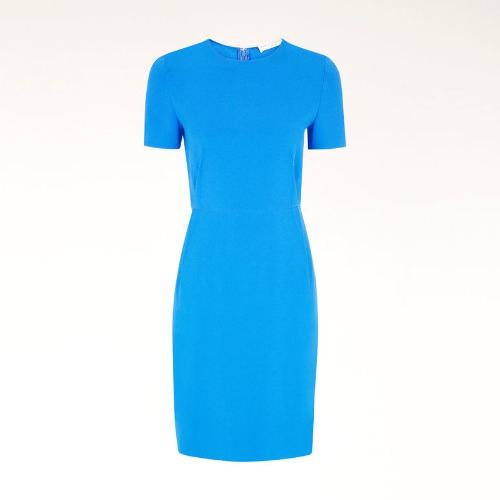 The exhibition featured images of athletes and staff during the build-up to the London 2012 Olympic Games.

It’s no coincidence that Kate chose to fly the flag for the British designer at the Olympics-themed exhibition. Team GB commissioned Stella McCartney to design their kits for the Games. It’s also very likely that Kate chose the bright blue shade as a nod to the national colours of the United Kingdom (red, white and blue).

The Duchess has worn the bold blue dress during a number of public appearances since 2012.

You may remember her pairing the dress with her Smythe blazer and Corkswoon wedges at the Commonwealth Games in 2014?

In 2016, she paired the dress with the same navy blue blazer and her L.K. Bennett Fern pumps at the Royal International Air Tattoo.

In 2020, she wore the dress in a video message calling for entries to her Hold Still photography project with the National Portrait Gallery. (All pictured above.)

About the Stella McCartney Ridley dress:

The blue dress features a figure-skimming silhouette with a pencil skirt that hits just above the knee. A unique pleat detail can be found on the front and back of the dress. The dress also has short sleeves and a hidden zip closure at the back.  Stella McCartney calls the bright blue colour “Ultra Blue”.

Where to buy the dress today:

As you may expect some eight years later, Kate’s Stella McCartney dress is sold out. You can still find it (new and used) on eBay at the time of writing.

This is not the first time Kate has worn a Stella McCartney dress.  In 2011, the Duchess attended a private birthday party for Prince Philip.  She wore a shiny coral pink silk dress from Stella McCartney’s S/S’09 collection. In 2019, Kate wore the same dress in a different colour/fabric to Archie Mountbatten-Windsor’s christening in 2019 (see below). 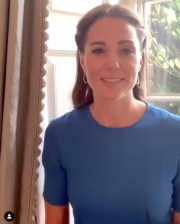