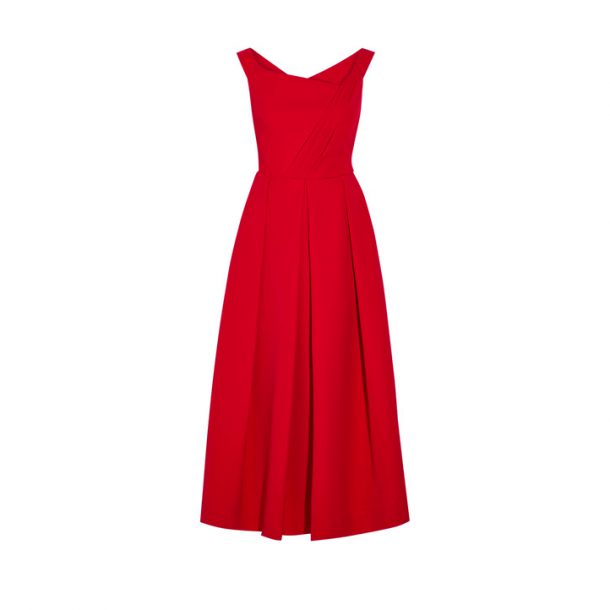 In 2016, the Duchess of Cambridge (Kate Middleton) wore the Preen Finella dress to two different events.   She debuted the red version of the dress during day three of the Royal Visit to Canada, back in September.

Just two months later, she chose the black version of the Finella dress for an awards ceremony hosted by the charity Place2Be.

About the Preen Finella dress:

The Finella dress is made from stretch crepe fabric.  It features a draped bodice, nipped-in waist and box-pleated skirt.

Net-A-Porter calls the red version of the dress an “elegant choice for your next event”.  They describe it as having “a shoulder-framing neckline” and “a fitted, draped bodice that falls to a voluminous box-pleated skirt”.  Meanwhile, the company say the black Finella dress has an “ultra-flattering, elegant silhouette”.   The dress is made in the UK.

Kate reportedly purchased the first red dress from London department store Fenwicks and was so pleased that she requested the same style in black two weeks ago.

The article goes on to explain that Fenwicks stocked a pink version of the dress too.

About Preen by Thornton Bregazzi:

The company is run by husband and wife team Justin Thornton and Thea Bregazzi.  They are British and based in London.

Where Kate wore her Preen by Thornton Bregazzi Finella Dress 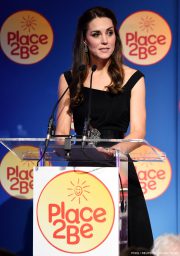