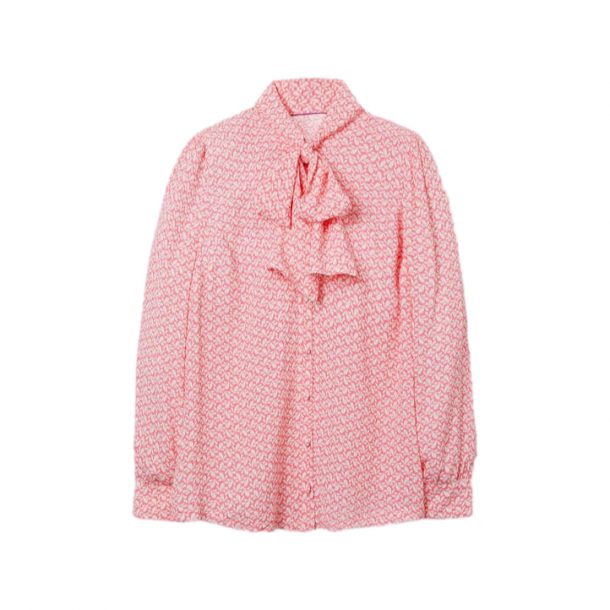 On International Women’s Day (8th March 2021), the Palace released a new video of the Duchess of Cambridge (Kate Middleton) chatting with Jasmine Harrison. This year, Jasmine broke a world record by becoming the youngest women to solo row the Atlantic. For the call, Kate wore a pink pussy-bow blouse by British brand Boden.  It’s their Dora Tie Neck Blouse and the company’s official name for the colour is Azalea Splash.

The Dora tie-neck blouse is lightweight and elegant with a flattering semi-fitted shape.  According to Boden, the full sleeves gather into the cuff “for an airy feel”.

Sadly, the “Kate-Effect” took hold and the pink Dora blouse quickly sold out. Boden’s ivory and paisley floral iteration of the blouse is still in stock at Boden.co.uk, BodenUSA.com, John Lewis and Nordstrom.

If you’re really aching for the pink version of the top, try eBay. You might find both new and pre-loved listings.

The Duchess of Cambridge is no stranger to a neck-tie!  She’s worn them many times in both blouses and dress form as a working Royal. Here are four of our favourite looks:

Above: Kate in a monochrome Zara dress during a visit to Bradford in 2020; The Duchess looked spectacular in this blue Elie Saab top at Royal Ascot in 2019; Kate chose a green L.K. Bennett dress for a visit to Evelina London Children’s Hospital in 2018 and Kate wore a white pussy-bow blouse from Somerset by Alice Temperley under her blazer during a visit to Haida Gwaii, Canada in 2016.

The neck-tie blouse became a symbol of female power dressing when worn by Margaret Thatcher in office, and of ultimate fashion flair when worn by Princess Diana – the pussy-bow blouse was the first piece in Diana’s official Royal wardrobe, worn to announce her 1981 engagement to Prince Charles

Kate’s added lots of Boden to her working wardrobe in recent years. She’s worn tops, dresses and coats from the British brand to a number of public engagements.   Here are a few pictures of Kate wearing Boden:

Boden sells clothing online and via its mail-order catalogue.  The company—which celebrates its 30th birthday this year—is well-known for its bold use of colour and daring prints.  The BBC call the brand “the unofficial uniform for so-called yummy mummies and their children across the UK”.