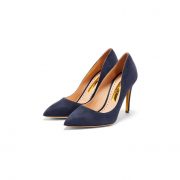 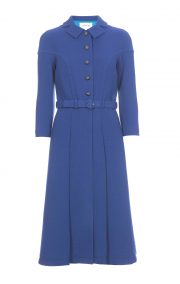 Wednesday, January 11th 2017—The Duchess of Cambridge (Kate Middleton) spent the day in London visiting two different charities.  They were her first public engagements of 2017.

The Anna Freud Centre is a children’s mental health charity with over 60 years of experience caring for and helping to treat young people with mental health problems.   The charity’s Early Years Parenting Unit works with parents who have personality disorders, and their children under five years old, who are at risk of being taken into care.  The treatment seeks to address the parents’ personality disorders; children’s developmental needs; and the parent-child relationship. The ultimate aim is to keep families together and help parents become more aware of, and responsive to, their children’s needs, leading to more emotionally attuned parenting.

During the visit, Kate took part in a discussion with parents and staff:

Kate spoke with one group of mothers who’d been through one of EYBU’s treatment programmes.  After learning about their struggles, Kate sympathised:

“Parenting is tough. And with the history and all the things and the experiences you’ve all witnessed, to do that on top of your own anxieties, and the lack of support you also received as mothers… I find it extraordinary how you’ve managed actually. So really well done.”

Later, Kate took part in a “Theraplay” session at the facility.  The session promotes the attachment relationship between parents and their children.

You may recall Kate is Royal Patron of the Anna Freud Centre. She has attended events hosted by the charity on a number of occasions.

Her Royal Highness became our Patron early in 2016, and the position marks her continued dedication to promoting mental health and wellbeing, in particular among children and young people.

In the afternoon, William joined Kate for her second engagement.  The couple visited Child Bereavement UK‘s London Centre, which marked its one year anniversary.

The charity provides support for children and families when a baby or child dies or is dying, or when a child is facing bereavement.  They also provide training for professionals (such as teachers) whose work brings them into contact with bereaved families.

You may recall Prince William is Royal Patron of Child Bereavement UK.  Kate last visited the charity alongside William in March 2013.

During the visit, William and Kate met professionals and volunteers who work for the service before meeting with children and families who’ve been support by the charity.

In addition, William and Kate attended a Family Support Group session with children, parents and careers who regularly meet up to explore themes like memories, feelings, support networks and resilience.  These sessions help people feel less alone, plus they decrease the sense of feeling ‘different’ when somebody important in their lives has died.

The Duke and Duchess concluded their visit by marking the East London centre’s first anniversary by cutting a birthday cake.

It’s from the label’s autumn/winter 2016 collection.  The blue knee-length coat dress features bracelet length sleeves, notched detailing on the collar and matching belt. The piece retailed for £1,650 according to this page on Pinterest.

It is the second time Kate has worn an item of clothing from Eponine London. You may recall she wore a brightly coloured skirt suit from the company back in March 2016?

Kate wore her sapphire and diamond earrings (picture on the right from another occasion).  They’re thought to be a gift from William and refashioned from a pair owned by Diana, Princess of Wales.  For more information, click here.

On her wrist, Kate wore her stainless steel watch by Cartier. It’s the 33mm size Ballon Bleu watch.  It should feel familiar to our regular readers, she’s worn it in public since 2014.

Kate’s blue clutch bag is another familiar piece. It’s the Muse/Raz clutch bag (it is known by both names) by Stuart Weitzman. The Duchess owns the bag in four different colours and carries them on a regular basis. Sadly, the piece has long sold out and no longer available to buy.

The blue suede shoes have gold detailing on the inside of the 100mm heel. The shoes cost  $675 USD (approximately £550). 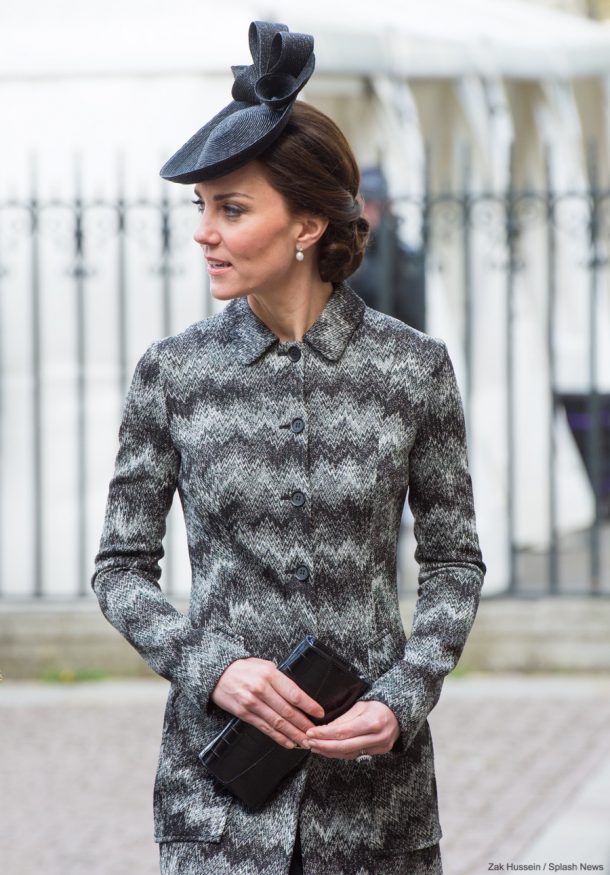 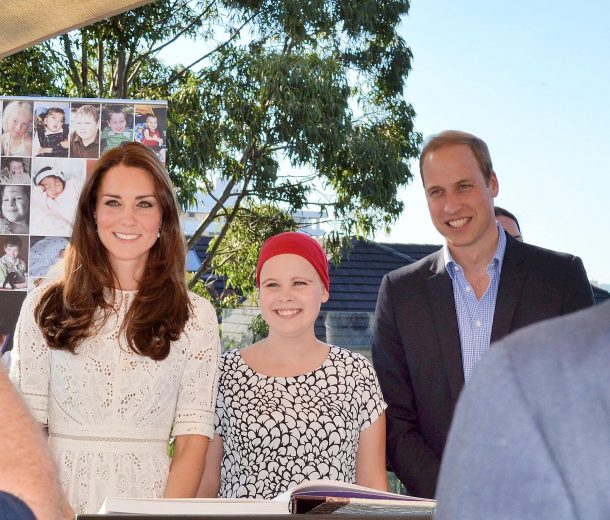