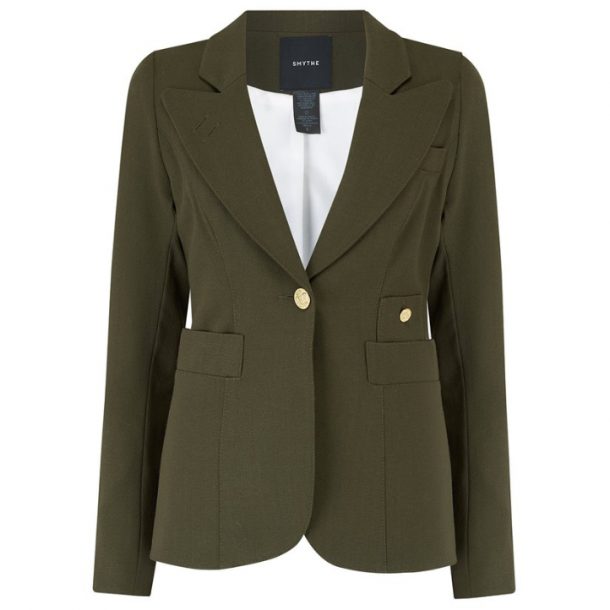 In 2016, the Duchess of Cambridge (Kate Middleton) visited Haida Gwaii during an official tour of Canada.  She spent the day canoeing, fishing, meeting people and learning about local projects on the remote group of islands.  A smart-casual outfit was necessary for the day’s events! The Duchess wore a wool blazer over jeans with a pair of boots. The blazer is by Smythe, a company founded and located in Canada, the host country.  Specifically, Kate chose their Duchess Blazer in Army Green.  No, that’s not a coincidence!  It was originally called the ‘One Button Blazer’.  They renamed it after Kate wore the blue version during an earlier visit to the country.

To date, Kate’s worn the green blazer a total of three times (on ‘official’ business, of course she might have worn it in private on a great number of occasions).  She chose the piece for a visit to Cyprus in 2018 and most recently, for a video call that took place in February 2021 (with families supported by Asthma UK and Diabetes UK).

About the green blazer:

The lightweight Italian wool blazer features notched lapels, long sleeves with button detailing, princess seams, front pockets and a cut-out panel at the bottom of the back.

Reviews at Saks Fifth Avenue are favourable.  Shoppers call the blazer elegant, classy and timeless.  One user calls the blazer a “work of art” while others say they love how it makes them look “put together”.  It’s worth reading the reviews for an idea on sizing—most people suggest sizing up as the blazer is very tailored.

Where to buy the green blazer:

Saks Fifth Avenue stock the Smythe Duchess Blazer in a number of colours, including Army Green as featured on this page and Navy Blue as worn by Kate on many occasions. (Also find it in Camel, Red, Ivory, Black and Slate.)

Other retailers include: Nordstrom, Trilogy and Revolve.

As we mentioned at the top of this page, Kate originally purchased the blazer in navy blue and wore it on her first official visit to Canada in 2011 (and dozens of times since!) After she first wore the piece, Smythe renamed it the “Duchess Blazer” to honour Kate!

As you’ll notice, the Duchess uses the blazer to smarten up a casual outfit, or she throws it over a dress for a polished look. It really is a versatile wardrobe staple!

Smythe, founded in 2004 by two friends, launched with a mission to perfect the women’s blazer.

Advanced styling, methodical tailoring, impeccable construction and designed to embolden the women who wear it; SMYTHE is the perfect, perfectly fitted blazer.

Smythe released a statement after Kate first wore the blue blazer, explaining that they were delighted and they design with women like her in mind “tailored and effortlessly chic”.

Where Kate wore her Smythe Duchess Blazer in Army Green 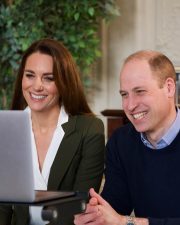 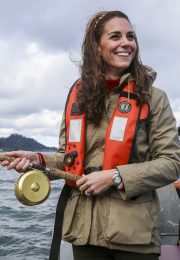