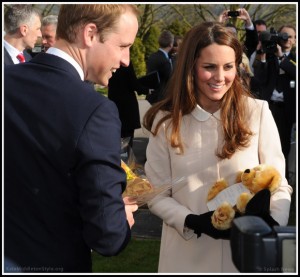 Just before 6am this morning, photographer Jesal Parshotam (@therealjesal) spotted a convoy of vehicles and security appear outside St. Mary’s hospital, along with @Babylon902 he broke the story – Kate had arrived at the hospital, in labour, ready to give birth to the Royal Baby!

Clarence House confirmed what Jesal had seen at around 7.30 this morning.  On Twitter they wrote:

Her Royal Highness The Duchess of Cambridge has been admitted to St. Mary’s Hospital, Paddington, London in the early stages of labour.

The Duchess travelled by car from Kensington Palace to the Lindo Wing at St. Mary’s Hospital with The Duke of Cambridge.

At the moment, it is not confirmed that Kate is having a natural birth, or was induced due to being overdue. The Daily Express’ Richard Palmer (@RoyalReporter) notes that the palace are not going to give further details on the issue.

According to ITV News Reporter Georgina Brewer (@GeorginaITV) the Lindo Wing have also published their own statement, saying:

It is likely that Kate will be in labour now for a number of hours and there’ll be sparse updates between now and the birth of the baby.

The baby will also become third in the line of succession, which mean Prince Harry will now be fourth and Prince Andrew, The Duke of York will be displaced to fifth.

We will post more updates later, as they come!